Younger Madaras Twin is a Co-Operator in Bloodborne.

The Younger Madaras Twin is a mysterious Confederate of The League. His story is strange, yet somewhat detailed.

He dons the Butcher Set and wields the Hunter's Axe, as well as a Hunter Blunderbuss.

Upon his first encounter, he is hostile and drops the Madaras Whistle when defeated.

This Madaras twin is not particularly hard to fight. He is, however, an enemy Hunter that is too strong for players new to the Forbidden Woods.

His strategy is to use the element of surprise when players leave the windmill after picking up Valtr's helm, rushing them mercilessly. His other surprise attack is when he makes use of the Madaras Whistle which can one-shot low-level players.

Alternately, he will focus on very plain attacks and will often use a fully charged attack with the two-handed Hunter Axe, thus creating openings for parries.

Hunters must equip the Impurity rune to be able to summon the Younger Madaras Twin.

The Younger Madaras Twin, along with his brother, are denizens of the Forbidden Woods.

The Twins grew up alongside a snake and developed a silent, inhuman kinship. Eventually, they learned human ways and became hunters. Both the twins became hunters, and brought back and dissected their beast prey, in order to support the villagers in their forbidden research. They fed their snake the beast entrails and it grew uncontrollably. They soon joined The League and bore its oath rune.

They discovered Vermin even in their beloved snake and after putting it out of its misery, the younger brother is said to have murdered the older. 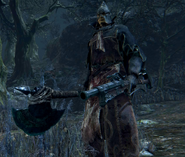 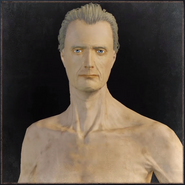