Yharnamites are characters in Bloodborne.

Yharnamites are citizens who are native to Yharnam.

The Moon Cycles will greatly affect the interaction with them during gameplay.

Yharnamites are citizens, native to Yharnam. They worship the Great Ones and their miraculous blood. Their chant, "bless us with blood", can still be heard here and there in the foggy alleys. Yharnamites prefer blood to alcohol, as the former is more intoxicating.

The miraculous blood of the Healing Church attracted all sort of sickly travelers to Yharnam to seek treatment. Many outsiders, like Father Gascoigne and Eileen the Crow, became citizens of Yharnam and joined the hunt themselves, sometimes as a form of payment for the treatment they received.

The Healing Church supplies the citizens with blood, treat the sick with Blood Ministration, and hold the highest position in the society. Unbeknownst to them, the very same blood was the source of the scourge of beasts.

At first, the Church would cover-up the incidents and deploy hunters to discretely dispose of the afflicted. This was the era of the first generation of hunters under Gehrman, the First Hunter of the Hunter's Workshop.

But then, the Paleblood Moon first appeared. This greatly accelerated the beast transformation. The beasts became more numerous and prowled the streets. The Hunters were no longer capable of quietly containing the threat. The Healing Church could not hide the scourge any longer.

In response, the Church formed their own official workshop to replace the former and appointed Ludwig as the first official hunter of the Church. Ludwig decided to arm and train the citizenry to fight the beasts as his Church Hunters. Following his call, many Yharnamites that lacked his training also joined the hunts, which soon became a regular event. This mob, led by the Church's black-garbed doctors and church servants, roamed the streets where they cut down the beasts and the infected. Anybody who showed symptoms of the plague would be purged indiscriminately. The Church now operated without care for how they looked to the public. Those who had lost family and friends started to show resentment towards the hunters and the hunt.

The mob that had arisen to join the hunt were poorly armed. Equipped with pitchforks, axes and wooden shields, all of which are ineffective against a single beast, let alone the hordes of beasts that run rampant. They often brought torches and Molotov Cocktail, for they believed fire can cleanse impurity. The only advantage the mob held against the beasts were their sheer numbers, an advantage they soon lost as the hunt progressed and the plague transformed more people.

After the incident that struck Old Yharnam, the Church closed the Great Bridge leading to Cathedral Ward abandoning the citizens outside to their fate. Free of the Church's direction, the mob now hunted beasts and outsiders alike, believing that outsiders were the source of the scourge. These huntsmen, however, were afflicted themselves and slowly turned into the creatures they hunted. Their beastly transformation is apparent to the Hunter even as their night begins.

The few sane Yharnamites locked themselves inside and use incense to ward off the beasts. Some of them can be interacted with from their candlelit window or through their doors. Some of them might even ask for shelter while providing information to the Hunter, provided the Hunter knows of such places.

Because of their xenophobia towards outsiders, their fear of beasts and general resentment towards the hunters, many Yharnamites believe that the Hunter wants to trick them to open their door in order to rob or slaughter them. Due to this, many of them remain in their so called "safe houses". They generally don't last for long, as either the beasts break in, or they become beasts themselves.

These Yharnamites can be interacted with and serve as side quest givers in the game.

There is a survivor in the Forbidden Woods, but she cannot be interacted with at this phase because the player needs the password from Laurence's skull to enter Forbidden Woods.

After the death of Vicar Amelia, either a message "no response" will pop up or some maniacally inhuman screeches and screams will be heard upon interacting with many dwellers, suggesting they have either been slain by the beast or transformed into something inhuman themselves.

Some dwellers can still be interactable

After the death of Rom, the Vacuous Spider, the blood moon rise and the beast roam the street of Yharnam. Most of the Yharnamite dweller are either dead or transformed due to their incense shortage. The only survivor is the dweller in the Healing Church Workshop Village.

the old woman in Forbidden Woods

The old woman in Forbidden Woods 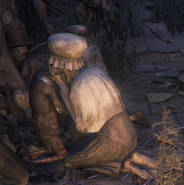 A dead woman tied to her bed 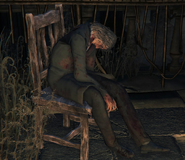 The down-trodden Yharnamites depicted in Bloodborne comic
Add a photo to this gallery
Retrieved from "https://bloodborne.fandom.com/wiki/Yharnamites?oldid=88776"
Community content is available under CC-BY-SA unless otherwise noted.