"And when the Great Ones descend, a womb will be blessed with child."
— Unknown Byrgenwerth Scholar

Yharnam, Pthumerian Queen is a Chalice Dungeon boss in Bloodborne.

Yharnam was the Queen of the ancient Pthumerian civilization and mother to the child Mergo. She wears a white, bloodstained dress with a veil to conceal her face, although she removes it when the player finds her in the Nightmare of Mensis. Like other Pthumerians, she has black eyes with no pupils and skin resembling a shriveled corpse.

When confronted in the Pthumeru Ihyll Chalice Dungeon, her dress is completely white but becomes bloodier and bloodier as the fight progresses. Her hands are initially chained but she breaks free and wields a dagger in combat. When low on health, she will use her blood to empower her dagger, making it resemble a sword.

Perhaps her most disturbing feature is her pregnancy, the child in her womb (Mergo) constantly cries throughout the battle and is even capable of paralyzing the player with its cries. The pregnancy also helps the player. After taking enough damage, Yharnam will make two clones of herself. The true one is the one that is pregnant. However, it is important to kill the clones, as they will be a major nuisance. 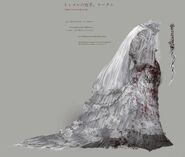 Yharnam at the Nightmare of Mensis 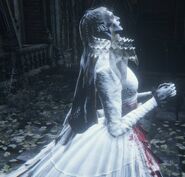 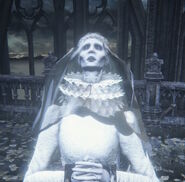 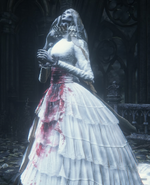 Yharnam coats her sword with blood 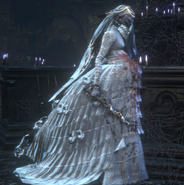 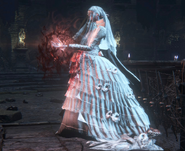 The altar she was praying to feature a Hunter's Mark.