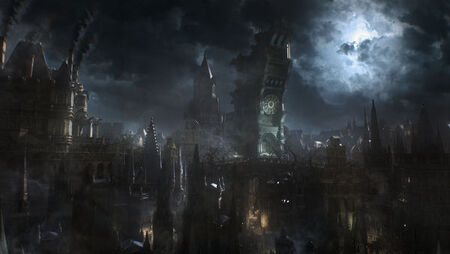 Yharnam is the city where the events of Bloodborne take place.

Yharnam is an imposing and sprawling metropolis characterized by Gothic and Victorian architecture.

Yharnam's Victorian architecture is reminiscent of late 19th Century European cities including Paris, Edinburgh, Cologne and London. Residents of Yharnam are called Yharnamites. The town appears rather grim and decadent and has been ravaged by a mysterious plague, becoming infested with dangerous beasts and demented citizens.

During the outbreak, the inhabitants of Yharnam formed large street mobs and pursued those who were infected by the plague, the beasts that terrorize the city, and trespassers who dared to set foot in the dark streets. Those unfortunate enough to be captured by the mobs of crazed citizens meet a gruesome end, often at the stake.

Yharnam is an ancient city renowned as the home of a mysterious medical remedy to the plague. Over the years, many desperate travellers have ventured into this city in search for this cure. None of them have returned. The Hunter of Bloodborne ventures into the perilous streets of Yharnam hoping to discover the origin of the plague. Yharnam is named after the Pthumerian Queen.

Português do Brasil
Community content is available under CC-BY-SA unless otherwise noted.
Advertisement