Yahar'gul, Unseen Village is a location in Bloodborne.

If the Hunter dies to a Kidnapper, a cut scene will be triggered and they will be taken to Hypogean Gaol. Most of Yahar'gul, Unseen Village is inaccessible until Rom, the Vacuous Spider is defeated, after which the Hunter will be teleported to the area with the Lesser Amygdala who will transport you to the Lecture Building. The door to Yahar'gul will now be open.

Within the village, the entire population of Yahar'gul appears to have been killed in the process of a ritual performed by the School of Mensis, with a staggering amount of corpses melded into the walls or cowering in isolated corners.

Yahar'gul was originally a city for the Mensis Scholars to explore the nature of Great Ones and how to propel humanity into its next evolutionary step, much like Byrgenwerth and the Choir they believed that it was from Insight, the "eyes on the inside" and the pursuit of forbidden Arcane knowledge was the staircase that allowed humanity's ascend into godhood. However, unlike those other groups, the School of Mensis was prepared to do whatever it took, without any remorse or consideration for the consequences.

However, after the Blood Moon rises, it would seem that the Pthumerians became more active, and began to perform blood rites to summon the dead population and control them at their whim. All foes of this area have become gruesome amalgamates of flesh, or reanimated corpses, which are controlled by the Bell-ringing Women.

They then began to summon what would seem to be the vessel for a Great One, The One Reborn. It is presumed this vessel was meant for Mergo. If, the player did not interrupt it that is.

It is unknown wether what killed the populace was the Mensis Ritual or the preparations of the Pthumerians' rite for summoning The One Reborn.

Many Great One Amygdala take up residence upon the chapels in the area, as they were drawn to prayers. 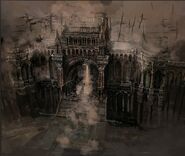 A statue depicts an Amygdala 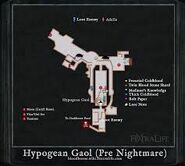 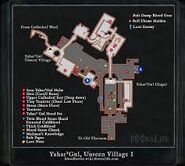 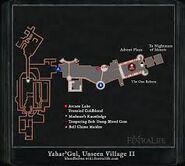 Yahr'gul as seen in Bloodborne: The Veil, Torn Asunder.
Add a photo to this gallery

Retrieved from "https://bloodborne.fandom.com/wiki/Yahar%27gul,_Unseen_Village?oldid=89358"
Community content is available under CC-BY-SA unless otherwise noted.