A Visceral Attack is a gameplay mechanic in Bloodborne.

With a firearm equipped, a shot fired by pressing L2 with proper timing just before an enemy attacks causes the enemy to stagger. An enemy can also be caused to stagger by facing its back and holding R2 to unleash a charge attack. Once an enemy staggers, press R1 to execute a visceral attack.

Visceral Attacks are interesting as they present the player with an opportunity to deal a lot of damage on a defenseless enemy. To trigger a visceral attack, a player must do one of three things: either parry a foe at the right time, doing enough stagger damage, or, a charged strong attack is struck on the foe's back, this type of visceral attack is described as a backstab by the community. Large enemies frequently are not possible to parry, and as such can only be backstabbed or staggered.

For large, unparriable bosses, visceral attacks are only possible during a certain part of a fight, and are often, if not always limited to 1 or 2 moments during the entire encounter.

It is important to note that the damage dealt by a Visceral Attack is governed mostly by the player's innate Skill stat, and, as such, players with high skill will get much better damage upon a visceral attack when compared to a player with low skill. Additionally, a visceral attack will be boosted by the blood-gems on the right-hand weapon at the moment of its execution. This includes elemental damage.

Lady Maria hug visceral attack. The Hunter in this picture is actually female.

Visceral attack with an Augur of Ebrietas 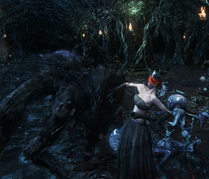 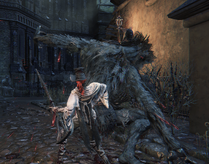 Double Visceral Attack on Orphan of Kos
Add a photo to this gallery
Retrieved from "https://bloodborne.fandom.com/wiki/Visceral_Attack?oldid=88439"
Community content is available under CC-BY-SA unless otherwise noted.