"Seek the old blood, but beware the frailty of men. Their wills are weak, minds young."
— Vicar Amelia

Vicar Amelia is a boss in Bloodborne.

Vicar Amelia is a high-ranking member of the Healing Church, the successor of Laurence, and to whom his Gold Pendant has been passed down.

In stark contrast with the Beast Patients, people that slowly turn into monsters under layers of bandages, this woman shows perfectly what happens when a human mutates suddenly into a full-fledged Beast: at first Amelia is seen as a normal female priest with tattered white robes, kneeling and reciting a prayer, but after a few instants she changes abruptly. Her skin ruptures under the force of her new body, splattering blood all around: now another kind of Cleric Beast, her ash blonde hair has become a long wild mane while her face, covered by scraps of her clothes like the rest of her body, has turned into a lupine head with thin antlers and a slasher smile of sharp teeth.

Even if she appears less bulky and almost skeletal compared to both male Cleric Beasts, she is far from weak and frail: her hands' talons, which she can extend like a cat, are sharp and so hard that they emit sparks while grinding on stone. Her scrawny arms are powerful as well, being able to create a strong shockwave by smashing them to the floor.

Even the same Gold Pendant that she still clutches proves to be more than a simple locket: Amelia is able to use it to channel energy in order to start healing her wounds in a pillar of golden light, thus making it some sort of Hunter Tool.

As a "True" Beast she will take extra damage from Serration.

Being a beast, Vicar Amelia is weak against fire and serration damage. Rope Molotov Cocktails can be effective when Vicar Amelia is stunned. The Flamesprayer can stun-lock her and deal massive damage. Also combining the Saw Cleaver (saw form) or the Saw Spear with Fire Paper is a good choice due to the additional damage dealt by fire and the hidden +20% ATK multiplier against beasts of these two weapons.

Amelia attacks mainly with her right claw, as she holds the pendant in her left (making the left side more vulnerable).

When her health is below 50%, Amelia can heal herself through prayer. Attacking and staggering her will interrupt the healing. A Numbing Mist can be thrown at her to prevent healing. It is suggested that you throw the Numbing Mist immediately after she reaches 50% HP, as casting it when she starts her prayer will take time and she will heal a significant amount before it is stopped by the consumable. Each Numbing Mist prevents healing for 30 seconds.

Vicar Amelia repeats the following prayer while kneeling before the altar as you approach her: 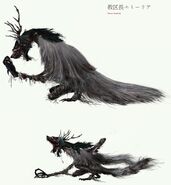 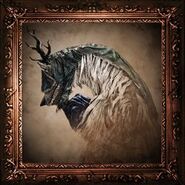 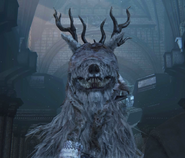 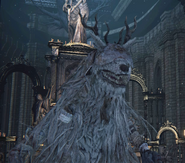 Retrieved from "https://bloodborne.fandom.com/wiki/Vicar_Amelia?oldid=90934"
Community content is available under CC-BY-SA unless otherwise noted.