The School of Mensis

The School of Mensis is an affiliation in Bloodborne.

The School of Mensis controls the Unseen Village. The school has its roots in Byrgenwerth, a bygone institute of learning and as the name suggest, members of the school are mostly scholars who dedicate themselves to understanding the secrets and nature of the Great Ones and how to use them towards the advantage of humanity.

The upper echelons of the Healing Church are formed by the School of Mensis, based in the Unseen Village, and the Choir occupying the Upper Cathedral Ward.

The Scholars of Mensis notably don the Mensis Cage, a device they thought would protect their minds from the Eldritch Truth.

The School of Mensis was founded not long after Laurence departed Byrgenwerth. The very first members of the school consisted mostly of former students of Byrgenwerth and some Tomb Prospectors.[1]

Along with Laurence, the School of Mensis contributed in founding the Healing Church and thus gained a high seat in the church. Together, they established a foundation of blood healing.

After the discovery of the land of Isz and left behind Great One - Ebrietas, Daughter of the Cosmos, the Choir was formed from the highest ranking member of the school to find a solution.

Though their goal is to find a way to evolve mankind, their methods are different and they do research independently.

The Healing Church focus mostly on Old Blood and Blood transfusion which later proved disastrous. The Church deployed hunters to dispose of the beasts but the hunters later become blood drunk and transformed into even more inhuman beasts. This unending cycle ultimately resulted in the destruction of Yharnam and the church spent all of its resources to combat the beasts, and thus they could not have any further research to undergo.

The Choir had further success, they discovered the importance of Lumenflowers in the process of creating Kin and successfully created Celestial Emissary to communicate with Ebrietas, Daughter of the Cosmos and focused mostly on the cosmos and further ascension. They formed an orphanage to use children for their research.

The School of Mensis, after the discovery of the land of Loran, start to deploy hunters to kidnap people for their research. They also control the Hemwick Charnel Lane to harvest organs from the dead to perform blasphemous rituals. The school also had several contacts with the Amygdala, and worshiped them. Many Amygdala statues can be found in Yahar'gul, Unseen Village.

The three affiliations later become rivals to one another and several conflicts sparked. The Choir sent agents to spy on the School of Mensis. The school responded by kidnapping members of the Choir and the Healing Church.

Archibald secretly worked School of Mensis to do research on generating the same blue sparks that blanketed a darkbeast. The school provided Archibald with a captured darkbeast and later he sucessfully created the Tonitrus, Tiny Tonitrus, and Bolt Paper - invaluable arsenal for the kidnappers deployed by the school to deal with the Kin deployed by the Choir.

Some time before the arrival of the Hunter, the school used a Third Umbilical Cord to have an audience with Mergo - an infant Great One. The Bloodmoon rose and turned most residents of Old Yharnam transformed into flesh hungry beasts.

And on that moon lit night, while Old Yharnam was burned to ashes and hunters from many affiliations tried to stop the madmen's ritual, the scholars of Mensis, led by Micolash sent their collective conciousness to the Nightmare of Mensis. Not all scholars agreed with with Micolash, and the handcuffs they wear are evidences about this disagreement. Perhaps, that is why Damian, the only scholar who escaped the ritual co-operates with the hunter.

But the school only had one cord, resulting in the stillbirth of their brains. The only surviving member was Micolash.

Rom, a scholar of Byrgenwerth, sacrificed herself to ascend to Kinship, creating a living bulwark to the Eldritch Truth. Her action forever trapped the mad scholars in the nightmare. 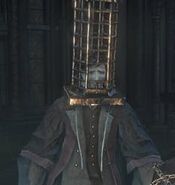 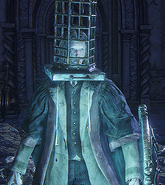 Kidnapper deployed by the school

Nameless Yahar'gul Hunter -kidnapper, one of the Yahar'gul trio hunter

Nameless Yahar'gul Hunter -kidnapper, one of the Yahar'gul trio hunter 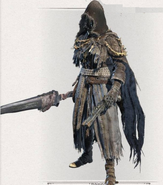 The dead scholars of Mensis

A Mensis scholar with handcuff