Bloodborne Wiki
Register
Don't have an account?
Sign In
Advertisement
in: Characters, The Death of Sleep Characters, Comic Characters

The Hunter (The Death of Sleep)

The Hunter is the main protagonist of Bloodborne: The Death of Sleep.

The Hunter dons the typical Hunter Set, armed with a Saw Cleaver and a Hunter Blunderbuss. Very little of their actual face is visible when wearing the Hunter Hat, but it can be seen that the hunter has a tanned complexion and pale blue eyes with feminine features. When unmasked, the Hunter reveals an androgynous appearance, possessing short, frizzy white hair.

The Hunter is first seen within the burning district of Old Yharnam slaying numerous beasts. It is implied that the Hunter has been stuck in the night of the hunt for an extended period of time, as they vaguely remember the victims of their slaughter. Soon, they rendezvous at a cathedral and are greeted by Retired Hunter Djura and numerous other hunters within. Djura presents the Hunter to a frail child with pale skin. Though the Hunter is initially dismissive, the child reveals themself to bleed white blood, to the Hunter's shock. The Hunter deduces that the child is Paleblood and decides to escort them to safety to transcend the hunt. A beast raid suddenly interrupts things, with the Hunter taking up arms and telling the child to stay put. Amidst the chaos, the Hunter comes face to face with a Blood-starved Beast, but the beast quickly overpowers and kills them. Reawakening at the Hunter's Dream, the Hunter, now longing for death, is greeted by The Doll and Gehrman. Gehrman tells the Hunter that if they truly want to be free from the night, they must seek Paleblood to transcend the hunt. The Hunter teleports back into Yharnam where they are to relive the exact same circumstances as before.

Soon, the Hunter reunites with the child, escorting them into the outskirts of Yharnam and into the Forbidden Woods to seek a certain healer who could be of use. Both look behind them to view the city of Yharnam from a distance engulfed in flames, the same Blood-starved Beast staring back at them atop a building. After a grave encounter with a Great Snake Ball, the child and Hunter, now deeply wounded, descend into the 1st Floor Sickroom where they are treated by a sympathetic Iosefka. Iosefka asks for the Hunter's gender, with the latter replying with "I am...a hunter." The Hunter returns to the Hunter's Dream where they confirm to Gehrman that they have found Paleblood, though Gehrman is less than conclusive. The Hunter and Gehrman discuss the morality of their actions, though Gehrman implores the Hunter that they should leave, lest the "Presence" overhears their conversation.

Returning to the clinic, the Hunter encounters the same Blood-starved beast lingering in the interior, though it is unaware of their presence. Iosekfa quickly tells the Hunter to come through a door leading to her library before they take any action against the beast. Within the safety of the blood-library, Iosefka prompts the Hunter to leave so that the risk of contaminating her clinic alongside her patients is minimized. Iosefka says that once they leave, she'll lock the doors behind, and the hunt can continue. The Hunter replies that they are no longer concerned with the hunt and instead asks her for a map to the Fishing Hamlet so that the two can procure a boat. The Hunter swears that they will "help the child escape" from the nightmare. The child, much to the Hunter's surprise, remarks to the two that they made the beast leave the clinic, their white-colored blood trailing down their nose.

After a period of time, the Hunter and child are seen traversing through a desolate valley, now engaging in casual conversation. The child then asks if they could borrow a cloth, to which the Hunter asks why. The child, blood pouring out of their eyes, nose and ears responds with "My eyes. I can't see." The Hunter is later seen piggy-backing the unconscious child, contemplating the validity of the child being Paleblood and how they were able to deter a monstrous beast. However, the Hunter still notes that the Blood-starved Beast is continuously stalking them from afar. At an isolated ruin, the Hunter makes camp for the two to settle. The Hunter asks the now healed child of their origins. The child responds with that all they remember is "a sea of fog". The child then asks if the Hunter is worried about the beast above them, to which the Hunter responds with that they cannot see any beast. Concluding that it was mere faulty eyesight, the child decides to fall asleep. At the top of the ruins, an Amygdala stares down from the two.

The next day, the two take leave, the Amygdala still watching them from afar. Time passes, with the two crossing vast empty lands until taking rest at another ruin, a hunter's corpse with a Whirligig Saw nearby. The child sleeps as the Hunter stays awake, contemplating the fact that sleep was now but a memory as the only thing they remember is the hunt. Soon, the Blood-starved Beast catches up and the Hunter takes arm with the Whirligig. After a brief battle, the beast pins down the Hunter, now accepting their fate. However, the child walks up to the beast and implores the Hunter to cover their ears. Suddenly, the child extends their jaw and lets out an ear-splitting screech, the beast splitting into two and dying once and for all. Perplexed, the Hunter then asks for the child to help them up.

The two finally arrive at the Fishing Hamlet, seemingly abandoned. The child looks up at the Hunter and asks "it all began here didn't it?" The Hunter sees beast-like footprints within the muddy path ahead of them, citing that perhaps the Hamlet is not as abandoned of its villagers as it seems. The Child points to a note written by Gehrman on a billboard. The note reads that the Hunter shall never know what Paleblood truly is, and that Gehrman cannot tell when nightmare ends, only that he is weak and wishes to be free from it soon. The Hunter scrunches up the note and throws it away. The child announces to the Hunter that they are getting weaker and it is becoming hard for them to walk, and so the Hunter forced to carry them. The Hunter wanders through the desolate village. The child, nose bleeding, asks the Hunter if they see "them," to which the Hunter sees nothing. From the child's perspective, three Amygdalas are looming over them. The child guides the Hunter through one of the monstrous Great Ones, cautious not to disturb it. However, the child's voice becomes more and more sickly and inhuman, and the Hunter soon looks down and sees that they are holding the child no more, but a grotesque monstrosity. Terrified, the Hunter drops the malformed child and vomits. The child hypothesizes that perhaps they are not what the Hunter seeks after all, and then reminds the Hunter that they may have been human once. The Hunter brandishes their Saw Cleaver and prepares to kill the beastly child, but the child's plea of "is that you, uncle Djura?" stops the Hunter in their tracks. Coming to terms as to why Djura was so protective of the beasts in the first place, the Hunter refuses to kill the relative of the old hunter. Instead, the two get into a rowing boat and sail into the misty ocean, awaiting whatever fate has in store for them. 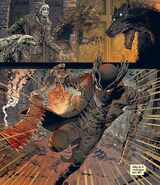 The Hunter leaps in to attack with their Saw Cleaver. 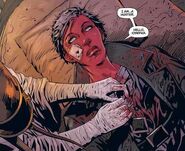 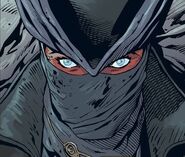