The Hunter is the player character and main protagonist of Bloodborne.

Bloodborne's trailers and concept art depict the Hunter as a male character wearing a black tricorn, a gray duster coat, a pair of brown leather boots, a pair of black gauntlets with golden ornaments and a reddish bandanna covering his face (known as the Hunter Set). His weapons of choice are a Saw Cleaver and a Hunter Blunderbuss. This version of the Hunter shouldn't be considered canon as the actual in-game Hunter is customized by the player, including gender, equipment, background, and other features that make the Hunter unique to each player's preference.

The origins of the Hunter are determined by the players themselves, ranging from a middle-class upbringing, a troublesome childhood, a military background, a member of a noble family, or a talentless weakling among others.

At some point in their life, the Hunter becomes afflicted with an unspecified disease and travels to Yharnam, an ancient city known for housing an old medical remedy which is said to cure any disease. Iosefka calls the Hunter "paleblood", and, on a note near the clinic, mentions are made of the need to find paleblood to "transcend the hunt."

After making their way to Yharnam, the Hunter ends up in Iosefka's Clinic where a strange-looking doctor is going to perform a blood transfusion on the Hunter as a treatment for their disease. Right after undergoing the transfusion, the Hunter falls unconscious and suffers from a nightmare. After they wake up, the doctor is nowhere to be found and the Hunter decides to get out of the clinic, and finds a Scourge Beast gorging on a corpse near the entrance.

Outside the clinic is the district of Central Yharnam. Here, the Hunter encounters hordes of demented townsfolk. The Hunter then might meet with several other characters like Gilbert and a fellow huntress known as Eileen, who informs them of the dire situation Yharnam is going through.

Using one of the several Lamps scattered throughout the city (or through means of death for the first time, almost always by the Scourge Beast in the clinic), the Hunter discovers the Hunter's Dream, an ethereal, dream-like area. In this place, the Hunter meets the Messengers, the little pale, implike creatures which previously appeared in their nightmare. The Messengers equip the Hunter with a trick weapon, a firearm and a Notebook.

Inside the Workshop, the Hunter is greeted by Gehrman, an old wheelchair-bound man who instructs the player to kill more beasts "for their own good". Using the Headstone of Awakening, the Hunter teleports back to the real world and makes their way to the Great Bridge, to face the Cleric Beast.

When the Hunter goes to speak with Gehrman at the foot of the tree in the Hunter's Dream, he will present the player with a choice: let him kill the Hunter to release them from their duty as a hunter and let them return to the waking world, or to fight with him. There are three endings, the third of which can only be obtained by using three One Third of Umbilical Cords.

Reborn Ending. The Doll is holding the Hunter who reborn as one of the Great Ones

The Hunter concept art, as an infant Great One 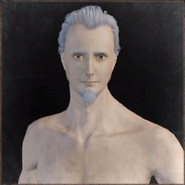