Bloodborne Wiki
Register
Don't have an account?
Sign In
Advertisement
in: Characters, Female Characters, The Death of Sleep Characters
English

View source
watch 02:17
New Pokemon Games - The Loop
Do you like this video?
Play Sound

"Welcome home, good Hunter. What is it you desire?"
— The Doll

The Doll is a character in Bloodborne.

An ordinary doll, but as the story progresses, something might change.

The Doll is found outside the Workshop, in the Hunter's Dream, as an inanimate porcelain doll. She later comes to life and serves as the Hunter's means of leveling up. She is a key character in the game's plot.

One Insight is required to initially interact with the Doll. If the player’s Insight drops back down to zero, she will become inanimate again upon appearing in the Hunter's Dream, although it will still be possible to interact with her in order to level up.

The Doll was tenderly made by Gehrman as a means to keep him company and to also serve the many hunters that would come to the Hunter's Dream.

The Doll is based on a student which Gehrman held affections to, Lady Maria. After Maria's disappearance, Gehrman sought to obsessively replicate her in the form of the Doll. The Doll herself has exactly the same size and appearance as Maria, as well as the same voice. However, Gehrman soon became indifferent towards the Doll's presence, possibly due to the latter lacking Maria's personality.

The Doll is soft-spoken and polite. She holds the Hunter in high regards and treats the Hunter with deep respect. Having been made by humans, she loves the Hunter, but is unsure whether her affection is real or artificial; a thought she ponders incessantly.

The Doll is very loyal to the Hunter. She accepts her role to serve, believing it to be her purpose. This is seen in all endings, as she serves the Hunter in some way or wishes the Hunter well. 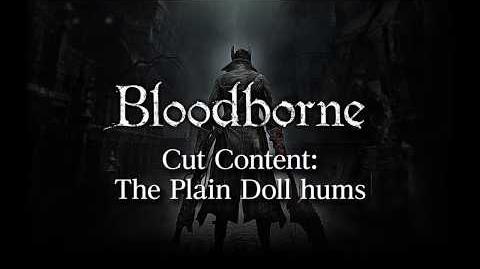 After giving her the Small Hair Ornament 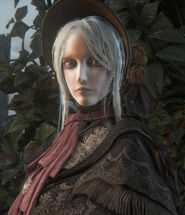 The Doll with the Hunter. 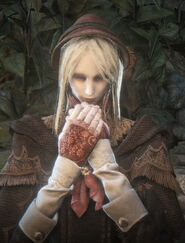 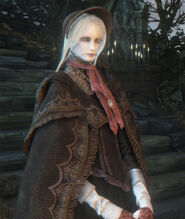 The Doll is very polite

The Doll holding a Great One who was The Hunter

The Doll in the Story trailer.

A photograph of the Doll.

The Doll with Gehrman in the Gamescom trailer. 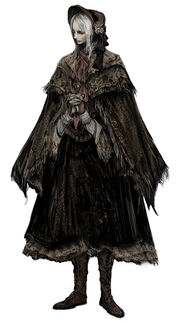 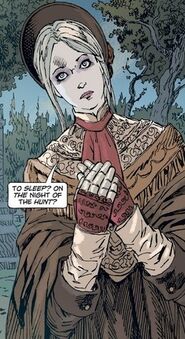 The Doll as it appears in Bloodborne: The Death of Sleep.