"Here we stand, feet planted in the earth, but might the cosmos be very near us, only just above our heads?"
— The Choir

The Choir is an affiliation in Bloodborne.

The Choir is the elite delegation of the Healing Church.[1] Alongside the School of Mensis, they are the highest ranking members of the organisation. Choir members mostly consist of scholars, doctors, tomb prospectors and clerics.

The Choir made most of the breakthroughs of the church, due to their discovery of the holy chalice that allow them to have audience with Ebrietas- the left behind Great One.[2]

Their ultimate goal is the evolution of mankind, although they use different methods than the School and the rest of the Church.

The Choir, like the Healing Church and the School of Mensis, pursue ascension. However, while the church pursues ascension through Blood Ministration, which proved catastrophic, the Choir pursues ascension through experimentation and insight gained from the left behind Great One whom they communicated with regularly. As well as being the highest ranking clerics of the Healing Church, the Choir are also scholars who continue the work that began at Byrgenwerth.[3]

Members of the Choir use Augur of Ebrietas, and A Call Beyond - two of the most powerful Hunter Tools available in-game and signature equipment of the Choir's arsenal. The Choir ran an orphanage to experiment on the children sent to them and cultivated Lumenflower Gardens to create Kin.

The School of Mensis might be former members of the Choirs since the highest ranking members of the school also possess some of the Choir's arsenals. However, the method of Mensis scholars are far more horrible: they deployed hunters and Pthumerian Kidnappers to kidnap Yharnamites to harvest organs for their blasphemous rituals. Though they are all rooted from the Healing Church, the Choir and the School of Mensis were openly hostile towards each other. Edgar, a member of the Choir is sent to spy on the school to keep them in check. The Choir itself eventually split from the rest of the Healing Church. After the fall of the Cathedral Ward to the beast, the surviving members of the Choir scattered, not having enough time to cover evidence of their work nor relocating Ebrietas.

Hidden within the Grand Cathedral, the Orphanage was a place of experimentation and study, whose members supplied the idea of forming the Choir itself. The Healing Church collected people, mainly young orphans, hence the name, to create a thinktank of highly intelligent scholars. The way it is described in the main game, through the Orphanage Key, the place is a scholarly location that trains the children's minds to become intellectuals. Upon unlocking the path to the Orphanage, however, one is lead into the Lumenflower Garden connected to the Healing Church's Research Hall. In the past, the place was populated by the patients were gruesomely experimented on to grant them the "eyes on the inside," specifically those who developed the ability to manipulate transdimensional cosmic energies. Once arriving there in the present, the Celestial Minions rise from the gardens, lead by the Celestial Emissary. A true Great One, this entity just happens to be directly underneath the Living Failures of the DLC, described as "the failed attempts to become Great Ones.

By this evidence, the Orphanage served as both the genesis for the Choir and for the victims of the Churches painful and gory experimentation to give humans "eyes on the inside." 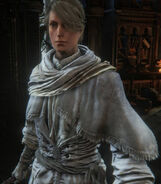 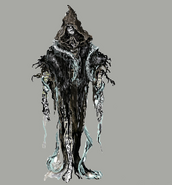 An unnamed dead Choir member found bounded to a chair and locked in a cell at Yahar'gul, Unseen Village.