"Secrets are secrets for a reason."
— Simon the Harrowed

Simon the Harrowed is a character in Bloodborne's The Old Hunters DLC.

Simon is a grizzled Healing Church Hunter, having seemingly been dragged into the Hunter's Nightmare, and can be found across multiple locations, explaining many things to the players as they reach him.

He appears to be quite an old veteran and one who seeks to end the nightmare he resides, not for his sake only, but for all of those who have been taken.

His eyes are always blindfolded, and has his hand positioned in a way that makes it seem like Simon is trying to cover his sight further, perhaps a testament that he has seen far too many horrors in this purgatory land.

He wears the Harrowed Set, uses a Hand Lantern and wields his iconic Simon's Bowblade.

Simon is found in the Hunter's Nightmare and serves a purpose of giving insight to the player as to what it is and what happens within it.

He explains the player how the Nightmare is much like a place of damnation, where Blood-drunk Hunters get carried into and quickly tells players to go back whence they came, unless the Hunter shows interest in Nightmares.

Upon showing interest in the Nightmare, Simon displays some contention with the player, but warning them that though secrets lie in wait, they are kept secret by those who do wish them to be unearthed, this serves as an illusion for when players finally contact Brador.

Upon defeating Ludwig, Simon will stand by his severed head, express his respect for him, how his tragic outcome was not beffiting of one with such dedication and courage, truly showing how much Ludwig meant to him, and likely his peers. If the Hunter did not slay his head, Simon will shoot his eye with an arrow from his weapon and gift the player's "Ludwig's guiding moonlight", the Holy Moonlight Sword. He then explains that the Nightmare "sprouted from the Hunters' misdeeds" and reveals that he is tired of all the secrecy that surrounds it, wanting to expose it once and for all.

Later on, once players find and activate the lever at the center top of the Research Hall that lowers many of the staircases, Simon will appear near the Lamp. Here he merely comments on how terrible the true face of the Healing Church really is with their experiments of humans. He tells the player that the real secret is hidden away behind Maria, atop the Astral Clocktower.

Upon Maria’s defeat, players can find Simon one final time, lying on the floor, inside the Lighthouse Hut. He will explain how he hears the bell and will reveal he was wounded by Brador who has been pursuing him relentlessly. He says that the Fishing Hamlet is the true secret, and with his last words makes a final request to the player begging him to put a stop to the Nightmare.

He dies with his last words of contempt of his, and his fellows, unfair fate. Leaving behind the Underground Cell Inner Chamber Key, the means to unlock Brador's Cell.

Simon's questline is very straightforward and its only possible means of failure is if players decide to attack him at any given point.

Players will not lose anything should they decide to kill Simon, except for some insight on the lore of the Hunter's Nightmare, and the NPC's that inhabit it, as well as the overall story of The Healing Church. Conversely, the only advantage to killing Simon is to acquire Simon's Bowblade early on.

To complete his questline merely speak to him and answer his questions at two locations, near the shortcut within Hunter's Nightmare that leads back to the Lamp, and at the Research Hall Lamp.

Finally, find him on the Lighthouse Hut to complete the quest and acquire both the Simon's Bowblade and the Underground Cell Inner Chamber Key.

If players choose to kill Simon for his weapon, then they should take care as he can be a formidable opponent, taking into consideration the player is likely at a lower level.

The best strategy to deal with him is quickly close in and use a fast weapon to stunlock him with two to three fast attacks then shoot him when he switches to sword mode for a visceral attack. Use the pillars in the area to block his arrows when needed to recover health. Since he's a quick opponent, it's best to use Hunter Blunderbuss or Ludwig's Rifle on him.

Alternatively, as with other AI-controlled hunters, he can be dealt with very easily if the players had Augur of Ebrietas. Simply close in, knock him down with it and repeat.

Simon dies at the hands of Brador 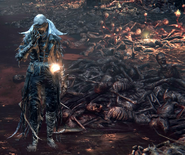 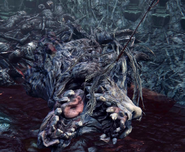 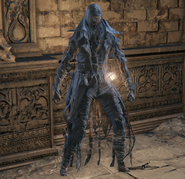 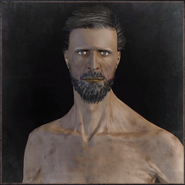 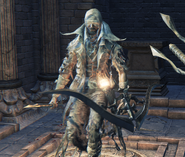 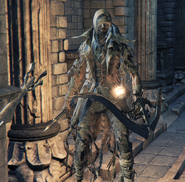 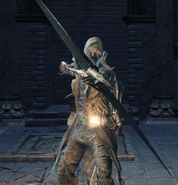 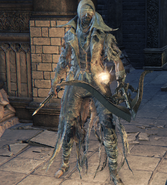 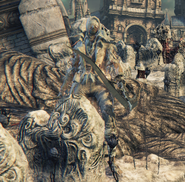 Add a photo to this gallery
Retrieved from "https://bloodborne.fandom.com/wiki/Simon_the_Harrowed?oldid=88768"
Community content is available under CC-BY-SA unless otherwise noted.