"You there! Hunter!
Didn't you see the warning?"
— Retired Hunter Djura

Retired Hunter Djura is a character in Bloodborne.

Djura is a legendary Hunter who, despite his old age, still displays a vast amount of skill when facing the beasts and seems to be strong enough to use his signature chain gun.

Djura has long, laid-back gray hair and sports an old Dutch gray beard. He is apparently one-eyed since he uses a bandage as a makeshift eyepatch for his right eye. Djura is dressed in tattered, silver clothes, and wears a tricorn similar to the one from the Hunter Set.

Djura is an old veteran hunter who is said to possess amazing skill. No one has seen him in many years, since he ventured into Old Yharnam, deserted and burned to the ground after the plague of the beast took its toll there long ago. Djura holds great sympathy towards the beasts and has sworn to protect them within Old Yharnam, hell-bent on keeping hunters out.

In Bloodborne: The Death of Sleep it is implied that The Child was once the human nibling to Djura, and that it was when they had become stricken with a terrible illness that Djura had a change of heart towards the hunt.

Djura is comparable to a skilled human invader, in terms of difficulty, and the small combat area does little to help the situation.

Upon killing Djura, players can loot his body for the Powder Keg Hunter Badge, and his trademark Ashen Hunter Set will be purchasable from the Insight Bath Messenger.

While most new players will just outright get to Djura and kill him so that they are no longer shot at with the chaingun, it is possible to befriend him, but only through a very contrived and time-consuming method.

To befriend Djura, one must do as follows:

Djura's note on the gate to Old Yharnam. 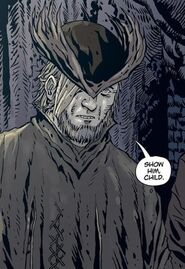 Djura as he appears in Bloodborne: The Death of Sleep.
Add a photo to this gallery

Retrieved from "https://bloodborne.fandom.com/wiki/Retired_Hunter_Djura?oldid=89498"
Community content is available under CC-BY-SA unless otherwise noted.