The Pilgrim is a Pthumerian in Bloodborne.

Pilgrims are tall, glowing Pthumerians that wear white robes and usually carry a long, wooden cane with a hooked top. They emit a strange chiming sound, appear to be completely harmless, and will not attack the player unless provoked, but are actually capable of dealing a powerful Arcane blast. After attacking once to defend themselves, they will resume their pacifist stance.

They have a sort of rosary or pendant that they clutch in their hands that depicts a Caduceus.

Though the way their attacks are always the same, and their differences appear to be merely cosmetic and in terms of behavior, there are still two variants:

Pilgrims can be found in Chalice Dungeons and are not aggressive towards the player, being only violent if provoked.

They will unleash a magical explosion if attacked but this can be easily evaded or even prevented by attacking the enemy. After retaliating once, they will cease their attack until the player strikes her again.

They are immune to Visceral Attacks because they don't get into the staggered animation. 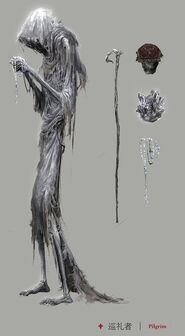 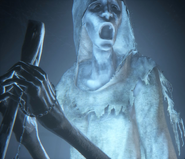 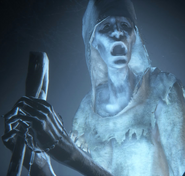 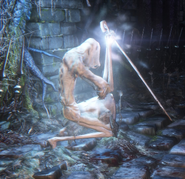 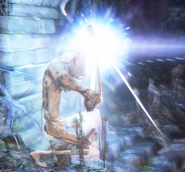 The Caduceus-type symbol of the Pilgrim.

The Praying Pilgrim destroying objects in its path.
Community content is available under CC-BY-SA unless otherwise noted.
Advertisement