Phantasms are the name for cosmic invertebrates in Bloodborne.

Phantasms are invertebrates - animals that neither possess nor develop a vertebral column. The known phantasms include mostly mollusc.

The phantasms, though they are only invertebrates, possess the ability to commune with the Great Ones and can channel cosmic energy.

In the nooks and crannies of the old labyrinth carved below Yharnam, the Healing Church has discovered a great variety of invertebrates, or phantasms, as they are called.

These invertebrates are known to be augurs and familiars of the Great Ones, notably the abandoned Great One - Ebrietas, Daughter of the Cosmos.

Some Phantasms, like the Pearl Slugs, are used in the Holy Chalice Ritual to unlock the seal to the deeper depth of the underground labyrinth, where the Great Ones slumber.

The slugs that now call Augur of Ebrietas are remnants of the Eldritch Truth encountered at Byrgenwerth. They have the ability to open a rift in space and dimension to partially summon the abandoned Ebrietas. The Choir realized the significance of the mollusk and make use of them as one of their most powerful arsenals.

Some phantasms species have shells and their slime harbor arcane power and can be rubbed on weapons to imbue them with their strength. The tomb prospectors chosen to explore the old labyrinth, are unable to withstand the weight of old knowledge, went mad. They wrap these shells on their garb as a kind of protective charm, or at least, that is what these lost souls believe with all their hearts. However, these shells with slime harbor arcane power and those who delve into the arcane fall all-too-easily to madness thus resulting in the very low Frenzy resistance of their attire.

The parasites that live inside Kos have the ability to stimulate the phantasms that inhabiting a Lumenwood and the Lumenwoods can make use of this to channel the cosmic power into themselves. Perhaps the Kos Parasite is another type of parasitic Phantasm. These parasites are cultivated in the Fishing Hamlet by its residents to extract their body fluid for fuel. They can also be burned directly like candles to provide light in the dark.

Some Phantasms species, parasitic in nature, inhabit human eyeballs. Many Byrgenwerth Scholars consider this is a blessing from the Phantasms. Deep within the eye lies a vast stretch of dark sky that rumbles with an endless meteor storm. The slightest rub of the tiny orb, and the rock will tumble and soar. These phantasms, perhaps, can open a rift in space. Many hunters remove their right eyes and put this blessed eye in to use it as a Hunter Tool.

The most powerful species of Phantasm is perhaps the slugs that now called A Call Beyond. Long ago, the Healing Church used phantasms to reach a lofty plane of darkness, but failed to make contact with the outer reaches of the cosmos. The rite failed to achieve its intended purpose, but instead created a small exploding star, now a powerful part of the Choir's arsenal. These phantasms, upon summoning the power of an exploding star, extend its appendages toward the sky in a similar fashion to Ebrietas when she summon that power and the Living Failures when they summon the meteors.

The Parasites are tended/ harvested by the Snail Women 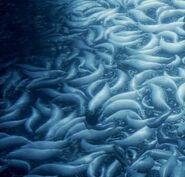 Parasite in the farm

parasite used as candle in the Fishing Hamlet

Add a photo to this gallery
Retrieved from "https://bloodborne.fandom.com/wiki/Phantasms?oldid=80748"
Community content is available under CC-BY-SA unless otherwise noted.