"Oh, doubt me not, sweet compeer.
What is friendship, but a chance encounter?"
— Patches the Spider

Patches the Spider is a character in Bloodborne.

Patches is a Nightmare Apostle with a man's head; his facial features are distinct from the other human-headed spiders, resembling characters from previous Souls games with whom he shares a name and some personality traits. His personality is as unsavory as his appearance.

After defeating Vicar Amelia and entering the Forbidden Woods, Patches replaces all NPCs found at interactable windows or doors in:

After talking to him at any of these locations he can then be found in person in the following locations:

Upon his initial indirect appearance Patches will offer the player the Tonsil Stone after describing "something grand" that can be found in an area to the right of the Grand Cathedral. This of course baits the unwitting player to visit the church at the top of Yahar'gul and thus to be grabbed by the Amygdala hidden within and transported to the Lecture Building.

Patches can subsequently be found behind a locked door in the Lecture Building, revealing only part of his face through a mostly obscured window (though if one looks closely with the Monocular his spider legs are slightly visible). Speaking to him at this location causes him to appear in the Nightmare Frontier, where he can't be interacted with directly. He sets a trap consisting of a trail of Shining Coins and a Coldblood Flowerbud and lurks on a nearby cliffside. Approaching the item triggers a cutscene where Patches pushes the Hunter into the ravine below.

Patches can finally be confronted face-to-face after defeating The One Reborn and accessing the upper floor of the lecture building; a ladder near the Church Giant descends to the room he's in. At this point the player can finally engage in direct dialogue without a door between them and Patches, and can choose whether to forgive him for his previous deceitful actions; Patches will give the Hunter a rune as a token of his friendship if they do. 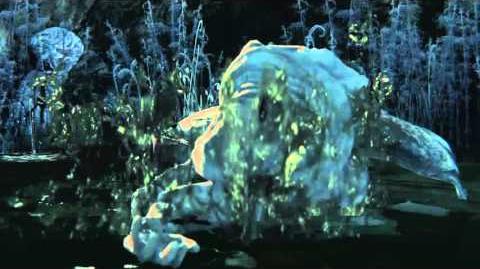 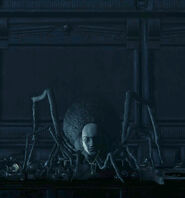 Patches as a merchant in Chalice Dungeons 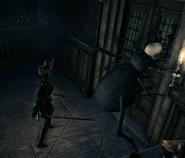