The Parasite Larva is an enemy in Bloodborne.

These enormous worms are neothenic creatures (none of them have ever shown a traditional adult insectoid form), likely fly larvae which became monstrous due to feeding upon contaminated corpses.

It is not entirely understood why they appear where they do, or their association with any particular types of creatures. All that is known is that they usually feast in places where there has been great bloodshed or violence, and that they will make hosts out of beasts.

These beings are always found in groups and due to their extremely small size and speed, may often kill a hunter with lower health or many successive hits.

Making matters worse is that they are extremely resistant to most sources of damage but are very vulnerable to blunt damage. As such, it is wise to either use a blunt type of attack with a weapon you have or, ideally, use weapons that have many attacks with blunt damage such as the Kirkhammer (in hammer mode), the Beast Cutter (both modes deal blunt damage), the Amygdalan Arm (in club mode) or perhaps even the Tonitrus or Boom Hammer (as both always deal blunt damage in addition to another element).

It is very recommended to use the Beast Cutter though, as the strong attacks of the whip mode will allow players to kill these vermin from a safe distance, and also because all of its moves deal Blunt damage, regardless of mode. 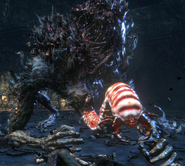