The orphan appears to be a Human/Great One offspring of the deceased Kos; the Orphan is a tall, skeletal humanoid. Its mouth is permanently fixed in a rictus grin and it constantly screams throughout the fight. A thin membrane is draped across its back like a cape, this transforms into a pair of wings when the Orphan enters its second form.

After its "death", it will drop the Kos Parasite, and its black phantom can be found near the “head” of Kos' corpse. Attacking it will result in it dissipating and a "NIGHTMARE SLAIN" message (similar to Mergo's Wet Nurse).

If you are in any way religious, it is also heavily advised to pray as much as possible to your god of choice for help, as killing this boss will most likely be the most painful thing you’ll ever have to do in your life. Losing faith in god during the fight due to the mental anguish caused is not uncommon. Having a therapist close by for immediate emotional assistance is also wise, as emotional co-op will not affect the Orphan’s damage or health pool and you will probably need it. 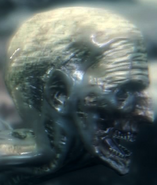