Old Yharnam is a location in Bloodborne.

Old Yharnam is an abandoned district located in the valleys of Yharnam. Since the town was set to flame long ago, most buildings are in a decaying state and the town is currently inhabited by dangerous Beasts and a venerable old hunter named Djura.

Old Yharnam still exhibits the aftermath of its final hunt and has several crucified beasts on the streets, set ablaze to send a a warning to the Beasts. It is in such dangerous terrible state now that none dare to enter this forsaken town. The final hunt of Old Yharnam is featured in the first issue of Bloodborne: The Death of Sleep, which portrays the city being engulfed in an inferno ravished with beasts and hunters alike.

A former district of Yharnam, Old Yharnam was abandoned and set to flame long ago due to the increasing number of cases of the beast's disease in the area.

It is said that the citizens of Yharnam can hear the starving howls coming from the valley in which the town is located, which reminds them of the destruction of Old Yharnam. The hunter Djura makes this place his refuge, slaying all who dare disturb the tranquillity. Old Yharnam is also the place of the plague's origins - which the plague was caused by ashen blood, making the beasts in Old Yharnam poisonous (female Beast Patients). 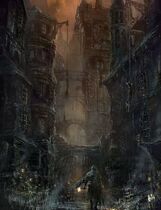 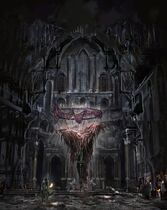 A burning carass of a Blood-starved Beast

Add a photo to this gallery
Retrieved from "https://bloodborne.fandom.com/wiki/Old_Yharnam?oldid=90599"
Community content is available under CC-BY-SA unless otherwise noted.