Master Willem, also known as Provost Willem, is a character in Bloodborne.

Master Willem is one of the more significant characters in Bloodborne.

Master Willem was the head of the Byrgenwerth college, a highly prestigious school of knowledge, and zealously pursued the truth and the idea of elevating the mind to the plane of the gods through Insight.

He sent expeditions into the old labyrinth to uncover the secrets of the ancient Pthumerians. Two things were uncovered from these expeditions; knowledge of the Great Ones and the Old Blood, from which the Healing Church would base its ministry upon. The scholars of Byrgenwerth became divided. Some, like Laurence, believed that the blood was the path to evolving mankind, while Willem was staunchly opposed to using the blood, believing that mankind must pursue Insight instead, warning against "evolution without courage".

Willem and Laurence eventually had a falling out, with Laurence leaving along with his followers to found the Healing Church. Willem considered this a betrayal. Laurence and his Healing Church would bring the blood to the city of Yharnam. The blood, that could cure any disease, made Yharnam extremely wealthy and powerful, but Willem was proven right in the end, when the blood was found to be infected, afflicting the entire city with the plague of beasts, with Laurence himself falling victim to it.

Willem continued his work, and seems to have eventually made contact with the Great Ones. However, doing so appears to have brought ruin to Byrgenwerth. Byrgenwerth lies ruined and desolate, as Rom came to inhabit the lake. The spider kept Willem trapped and isolated at the college. When the Hunter comes across him, all he is capable of doing is pointing towards the lake, beckoning the hunter to defeat Rom. 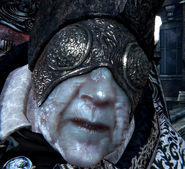 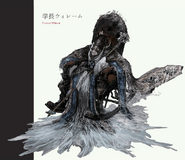