For the boss version of this enemy, see Maneater Boar.

The Maneater Boar is an enemy in Bloodborne.

Maneater Boars are pigs that have been affected by the Beast Plague which has increased their size and given them a taste for human flesh. It has also made them much more aggressive and they will relentlessly pursue anything that enters their territory. Their breath attack inflicts Slow Poison.

The Boars encountered in the Nightmare of Mensis have multiple eyes growing from their heads. Their breath attack inflicts frenzy as opposed to poison.

Maneater Boars often patrol fixed locations and are usually unaware of the player. Visceral Attacks can be use to inflict massive damage and will leave the Boar stunned for a few extra seconds. Once they detect the player, they will roar before beginning their attacks which can provide an opportunity to move behind them or sprint past.

Maneater Boars are strong but also surprisingly fast. Their charge attack inflicts heavy damage and they are capable of adjusting their momentum if the player evades too early. At close range, they will attack with body slams, head bashes and spewing poison. All these attacks are easy to predict and can be avoided by staying behind the Boar.

Boars are very vulnerable to fire damage and a single Molotov Cocktail can deplete most of their health. They are also susceptible to Pungent Blood Cocktails which can be use to distract them momentarily. 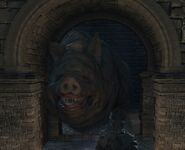 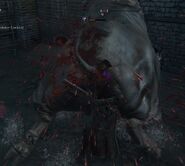 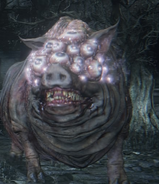 A Maneater Boar in the Nightmare of Mensis 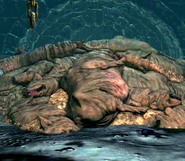 Dead boars in the Chalice Dungeons. 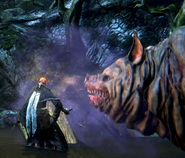 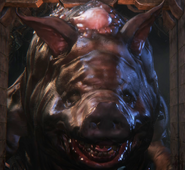 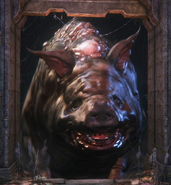 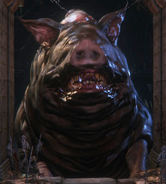 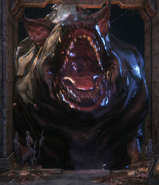 Retrieved from "https://bloodborne.fandom.com/wiki/Maneater_Boar_(Enemy)?oldid=89578"
Community content is available under CC-BY-SA unless otherwise noted.