The Madaras Whistle is a Hunter Tool in Bloodborne. It was added with Patch 1.07

Whistle of the Madaras twins, denizens of the Forbidden Woods. The Twins grew up alongside a poisonous snake, and developed a solent, inhuman kinship.

The poisonous snake grew uncontrollably, raised on a healthy diet of beast entrails. even after their deaths, it is said to respond to the call of the twins' whistle from within the Nightmare.

The Madaras Whistle is undoubtedly a Hunter Tool meant solely for players who focus on Bloodtinge.

For the cost of 4 Quicksilver Bullets, the caster will summon a giant snake from beyond the Nightmare directly beneath their current location. This snake will then bite and throw anything caught in its biting range into the air, dealing very high damage. This can affect the caster.

Due to its high cost and high damage, it is a tool best used to finish off or throw off opponents in PvP who would favor closer proximity to the player. It shines the most when cast in a tight room, or elevator. 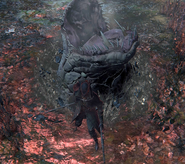 Retrieved from "https://bloodborne.fandom.com/wiki/Madaras_Whistle?oldid=89077"
Community content is available under CC-BY-SA unless otherwise noted.