Lumenflowers are an environmental element in Bloodborne.

Lumenflowers are a type of cosmic flora in the world of Bloodborne, a perennial plant with a similar appearance to sunflower. But unlike its real counterpart, the lumenflower is gigantic in size and the flower color is white. In addition, the lumenflower blooms at night instead of during the day.

The flower can be found in several locations associated with the Healing Church, specifically in Lumenflower Gardens and Lumenwood Garden. It is also a symbol associated with Lady Maria.

The following are all of the locations where Lumenflowers can be found.

The flowers play a vital role in the process of human ascension to a Kin of the cosmos, thus becoming a symbol of ascension as depicted on the Caryll Rune Communion of the Healing Church.

The flower is cultivated in Lumenflower Gardens and Lumenwood Garden, both controlled by the Healing Church. The church has failed several times in creating the Kin to commune with Ebrietas- the left behind Great One, the failures becoming the Clocktower Patients and the Living Failures. After many attempts, the Choir successfully created the Celestial Emissary- a powerful Kin that served as a bridge between the church and Ebrietas.

Rom is also an immensely powerful Kin that was a human who ascended to Kin. However, she lacks proper consciousness, hence the name "Vacuous Spider". This is theorized to be due to the lack of lumenflowers in her ascension.

The flowers are used mostly to feed the phantasm that inhabit a Kin.[1] The Milkweed rune turns the Hunter into a lumenwood Kin- the trunk of a lumenflower. 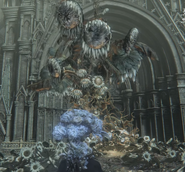 Lumen flowers that have not blossomed yet in Lumenflower Gardens 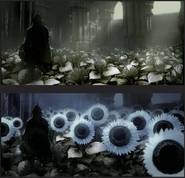 Its concept art shows that the flower only blooms at night 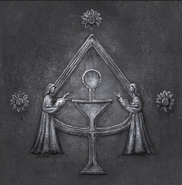 Lumen flower as depicted on the Communion rune - a symbol of belief of the Healing Church.

a lumen flower on a grave in Fishing Hamlet

the lumen flowers in the orphanage 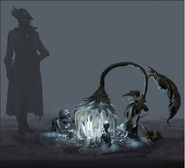 A Lumen Flower in Nightmare Frontier

the flower petals scattering in the Astral Clocktower

Retrieved from "https://bloodborne.fandom.com/wiki/Lumenflowers?oldid=91991"
Community content is available under CC-BY-SA unless otherwise noted.