View source
watch 02:58
No Man's Sky Update - The Loop
Do you like this video?
Play Sound

The Loran Cleric is an enemy in Bloodborne.

These horrid beings were once human priests of Loran that were transformed by the first Beast Plague.

Thanks to their powers or superhuman biology, their appearance became less feral yet even more foul than the other humanoid Beasts: even if their arms and pyrokinetic powers are similar to that of a Beast-possessed Soul, their face is almost demonic, sporting a thin, tendril-like tongue, dangling from a grinning open mouth, a long nose, and a pair of extremely long, twisted horns.

They don a richly decorated white cloak, true to their high status as clerics and they wear extensive golden jewelry in their neck and chest.

Their staff has "Y" shape at the end and has a rather twisted and molten form, it is used to support their hunched bodies and to summon balls of fire, which they then throw at their enemies. They also use them with great effect to hit opponents that get too close, knocking them instantly on the ground, thus implying that despite their feeble appearance, they are still monstrously strong.

These enemies are at their most dangerous when encountered alongside other enemies that can distract you from them. This is because they can not only deal a large amount of damage, but have a large range for these attacks as well.

When on their own, however, they are comparatively easy to kill due to how they are easily interrupted and have a large windup for most of their attacks. Keep in mind, though, that their Fireballs do deal a large amount of damage if they connect, and caution must be taken when approaching them. On occasion, instead of firing a single, high damage Fireball, they will fire two weaker fireballs in succession.

Should the player get within melee distance of them, they will attempt to hit you with their staff instead of using fireballs like they would at range. These attacks can be interrupted and riposted.

On rare occasions, they will emit an AOE ring of fire around themselves that has a massive range, typically enough to engulf and entire room in flames. This attack is difficult to evade, and as such effort should be taken to kill the Cleric before they can use this attack. 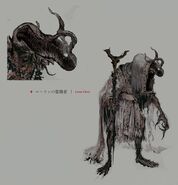 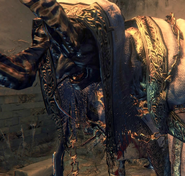 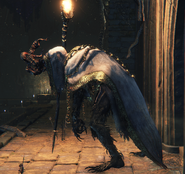