View source
watch 02:58
No Man's Sky Update - The Loop
Do you like this video?
Play Sound

The Labyrinth Mole is an enemy in Bloodborne.

The Labyrinth Mole is a rare enemy in Chalice Dungeons that resembles a star-nosed mole. It has a grab attack that induces Frenzy and it can spit Slow Poison.

It's head can transition through either ends of its body, and its tendrils can stretch out to catch its prey.

Despite its cumbersome and weighty looks, the mole is rather fast in its attacks, as well as very dangerous due to its induction of Frenzy.

It is weak to Bolt damage.

Its grab attack can induce Frenzy 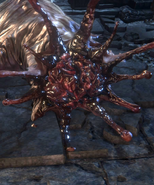 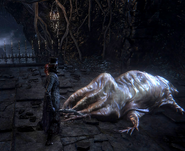