The Labyrinth Madman is an enemy in Bloodborne.

Tall, thin, and aggressive Pthumerians, the Labyrinth Madmen are always twitching and shaking as they gently pat the weapons they wield. Their mouths are almost always wide open and a few chains wrap around their bodies, implying that they were restrained in some way at one point.

Each of them is incredibly aggressive and can run at alarming speeds, but while both sickle variants focus on long combos, the Corpse-wielder will deal tremendous amounts of damage with a single hit and will deal Rapid Poison as an added effect.

The Labyrinth Madmen are only found in the Chalice Dungeons, and therefore do not scale with further playthroughs.

Labyrinth Madmen are incredibly aggressive and dangerous enemies, able to cross great distances in a short span of time, as well as inflict massive damage.

It is not recommended to attack them head-on, as their speed, aggression, and high damage make it very dangerous to do so. The very fast and unrelenting combos creates a good opportunity visceral attacks, albeit a risky one due to the unpredictability of their moveset. It is always reccomended to dodge first and then attempt the parry when baiting their longer combos.

A much safer strategy however, is to sneak up on them from behind (since they are often in rooms where they are not immediately within turned to players) to perform a fully charged heavy attack, and followed by a visceral attack. 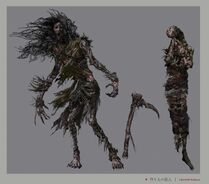 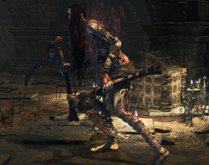 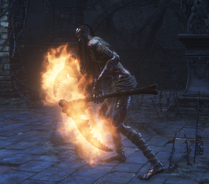 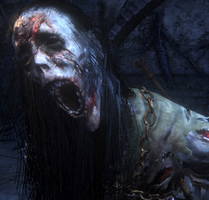 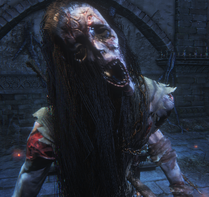 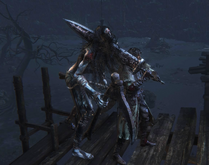 Add a photo to this gallery
Retrieved from "https://bloodborne.fandom.com/wiki/Labyrinth_Madman?oldid=93234"
Community content is available under CC-BY-SA unless otherwise noted.