The Kos Parasite is a Trick Weapon in Bloodborne's The Old Hunters DLC.

When the carcass of Kos washed up on the coast, its insides were teeming with tiny parasites unlike any found in humans.

This atypical weapon can only be clasped tight and swung, but a Kos Parasite is said to stimulate phantasms inhabiting a lumenwood.

The Kos Parasite is a singular weapon for many reasons. The most obvious is that it deals solely Arcane damage. It has also the highest stat requirement in Arcane for Trick Weapons.

When it comes to its attacks, they are all very slow, with very awkward stumbling on part of the player, yet do not be fooled, as every attacks deals a lot of damage and stagger.

Additionally, it has multiple strange moves such as whipping a tongue-like tentacle that sprouts from the player's head, a spit back step attack that deals Slow Poison, and a special move that creates multiple bursts of Arcane Blasts within a certain radius, which deal tremendous amounts of damage. At high levels of Arcane, players can often one-shot other players with this move alone, and since it is an area of effect attack, it can kill multiple opponents at once.

After equipping the Milkweed rune.

The Lumenwood form slightly glow in the dark. 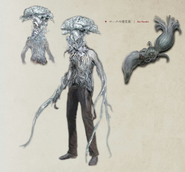