The Keeper of the Old Lords is a Chalice Dungeon boss and enemy in Bloodborne.

Granted eternal life by the ones she obeys, the Keeper of the Old Lords protects the slumbering Great Ones[1].

The Keeper of the Old Lords is not only an agile swordswoman, but also a skilled pyromancer, imbuing her blade with fire, and manipulating it to burn her foes with impunity. She wields a thin sabre as her main weapon.

She appears to have a hint of flame lining the brim of her hat and the ends of the cloth draped across her chest.

The Keeper of the Old Lords fights similar to an NPC hunter although she utilizes several fire spells in addition to her regular attacks. Most of these spells can be easily dodged by evading away or behind the Keeper but she will occasionally use an AOE spell if the player tries to remain behind her too long. Although she can be staggered by repeated attacks, she recovers very quickly and will retaliate with several rapid slashes so it is recommended to use hit and run tactics against her.

The Keeper will infuse her sword with fire when she reaches 70% health. She will become more aggressive, actively chasing the player and her sword combos become longer, which can be very dangerous if she manages to corner the player. She also becomes much more evasive and will frequently dodge projectile weapons.

A cheese is possible where the player knock her down with an Augur of Ebrietas, walk to her, and repeat.

The best strategy is to dodge behind her when she does arm attacks with fire, and combo. When you combo her, leave a small amount of stamina left to dodge the attack she will counter with. Don't forget to parry often, she doesn't have a massive health pool, so Visceral attacks will do considerable damage. If you have a high arcane stat then you could blast away her health easily. Don't be trigger happy, however, because after casting a spell at close ranges, she can close the distance at alarming speed and combo you. She is very good at punishing greedy players, so take time to back up and parry her.

The enemy variant of the Keeper behaves identically to the boss version except she is unable to buff her weapon.

They are always accompanied by two Keeper's Hunting Dogs and will use them to distract the player whilst they attacks with their fire from a distance. It is recommended to use ranged attacks to lure the dogs away from the Keeper before engaging her in combat. The Keeper of the Old Lords is resistant to fire and bolt attacks but is weak against arcane damage.

She is also weak to poison and very vulnerable to parries and visceral attacks.

Keeper of the Old Lords Stagger Tactic with Blade of Mercy

Concept art of the Keeper of the Old Lords 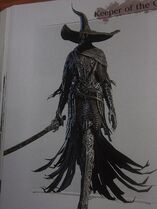 Render from the Official Guide 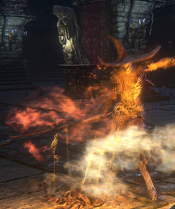 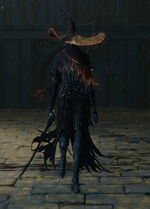 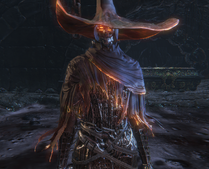 Add a photo to this gallery
Retrieved from "https://bloodborne.fandom.com/wiki/Keeper_of_the_Old_Lords?oldid=88641"
Community content is available under CC-BY-SA unless otherwise noted.