The Hunter's Dream is a location in Bloodborne.

The Hunter's Dream acts as a central hub and sanctuary for the Hunter, where items can be purchased and weapons can be upgraded, as well as a connection to every other location in game.

As the central hub, the Hunter's Dream connects to every location in the game. As well as serves as the connecting point to the Chalice Dungeons.

The Hunter's Dream is home to two potential final bosses, one is not a secret, the other, is. Each has a different ending associated to it. The last one on the list is the secret boss, accessible only by collecting a certain item throughout the game.

The Hunter's Dream is an otherworldly replica of the original Hunter's Workshop, now called the Abandoned Old Workshop under the Healing Church Workshop. Created by Gehrman and the Moon Presence, the Hunter's Dream was originally intended as a way to ensure there were always hunters to fight the beasts. Gehrman eventually realized that the Dream was bound to his consciousness, with each requiring the existence of the other, and nearly went mad from the revelation of never dying yet serving an eternal cause.

After defeating Mergo's Wet Nurse, the dream begins to fall apart, with the main building catching on fire as the obvious sign of it. Gehrman offers to release the Hunter from the dream, and become one of those "who no longer dream", such as Djura and Eileen. The player is then severed from the dream, and returns to reality.

If the Hunter refuses Gehrman's offer, then he will fight the player. Should the player defeat him, the Moon Presence descends and names the Hunter the new head of the Hunt, taking Gehrman's place.

If the Hunter had previously consumed three Umbilical Cords, they will realize the conclusion Gehrman came to, and reject the Moon Presence, fighting it for control of the Dream. After slaying the Great One, the player becomes a Great One themselves at the end of the battle, pushing humanity into its next phase of existence. 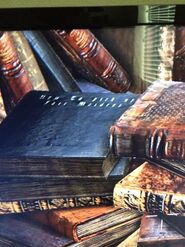 It is possible to die in the hunter's dream 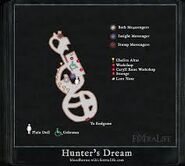 Retrieved from "https://bloodborne.fandom.com/wiki/Hunter%27s_Dream?oldid=90539"
Community content is available under CC-BY-SA unless otherwise noted.