"This is the Hunter’s Nightmare, where hunters end up when drunk with blood.
You’ve seen them before."
— Simon the Harrowed

The Hunter's Nightmare is a location in Bloodborne's The Old Hunters DLC.

The area itself consists of a twisted, nightmarish version of Cathedral Ward filled with terrors and blood-drunk hunters alike. Many parts of the Ward have been replaced with smooth rock faces, and is full of even stronger versions of normal enemies.

It essentially has 4 landmarks that exist in Yharnam but with different variations:

Though the Hunter's Nightmare is the name of a lamp, it is also the name of the surrounding area.

The Hunter's Nightmare is accessed through the Amygdala outside the Oedon Chapel, once the player is in possession of the Eye of a Blood-drunk Hunter after defeating Vicar Amelia.

The Hunter's Nightmare was created following the sacrilegious actions of the old hunters and Byrgenwerth scholars at the Fishing Hamlet, where the remains of a Great One named Kos had washed ashore nearby and mutated its inhabitants. The scholars and the old hunters slaughtered and mutilated the villagers in their search for "eyes" and other secrets, and had done something sacrilegious to Kos's body that would cause the creation of the Hunter's Nightmare and the curse that would befall the hunters. Old hunters and scholars who participated in committing the atrocities at the Fishing Hamlet, such as Maria and Laurence, would be condemned to the Nightmare, as well as any hunter who would become blood-drunk in the years following.

A corpse of an Amygdala in the Hunter's nightmare

A corpse of an Amygdala in the Hunter's nightmare 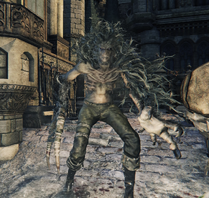 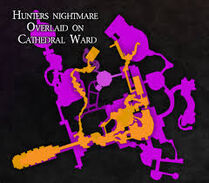