The Hunter's Mark is a consumable item in Bloodborne.

By focusing one's thoughts on this rune, a hunter loses all Blood Echoes, but awakes afresh, as if it were all just a bad dream.

The Hunter will lose all acquired Blood Echoes when this item is used, instead of teleporting to the Hunter's Dream.

Hunter's Mark on the tombstones in Chalice Dungeons 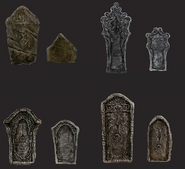 Hunter's Mark found on gravestone in the Chalice Dungeons

Strangely enough, Yharnam, Pthumerian Queen pray to this rune on an altar. Picture by Redditor Wildsdrom

HUnter's Mark on an altar in Chalice Dungeons
Add a photo to this gallery
Retrieved from "https://bloodborne.fandom.com/wiki/Hunter%27s_Mark?oldid=89068"
Community content is available under CC-BY-SA unless otherwise noted.