Hemwick Charnel Lane is a location in Bloodborne.

Hemwick Charnel Lane is one of several districts in Yharnam. As its name indicates, it is essentially a mass grave that follows a direct, straight road, though the player will have to unlock the main street by exploring the sidepaths.

The place seems to have been locked to prevent the Scourge of Beasts from infecting the area, as the forest at the entrance to the Charnel Lane is protected by Huntsmen and Hunting Dogs, in order to prevent any beast from traversing the gate.

Inside Hemwick it becomes quickly apparent that this small village is obsessed with the handling of the deceased. Many tiny houses with chimneys resemble crematoriums, and there are many guillotines to cut the bodies into pieces. Meanwhile, the crows feast as multiple crosses are raised with corpses on them so they are disfleshed and likely easier to handle.

Near the last area of this location, there is a large plaza where Executioners, Hunting Dogs and Grave Women patrol the area. This plaza was once connected to a large stone bridge that led to the now Forsaken Castle Cainhurst, and still has a small monument at the centre of it, dedicated to the old nobles. 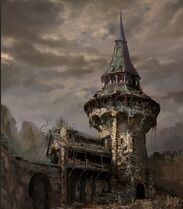 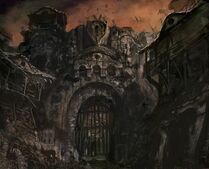 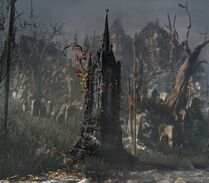 The entrance to Hemwick

Bound and hung corpses can be found in the charnel lane. Maybe they were stored like this so the wind can dry them, making them easier to extract Bone Marrow Ash.

Forsaken Castle Cainhurst can be seen from Hemwick. 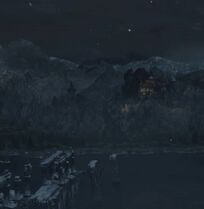 View of Hemwick from Cainhurst

The wagon to Forsaken Castle Cainhurst 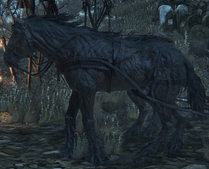 Retrieved from "https://bloodborne.fandom.com/wiki/Hemwick_Charnel_Lane?oldid=89326"
Community content is available under CC-BY-SA unless otherwise noted.