watch 04:21
Wiki Targeted (Games)
Do you like this video?
Play Sound

The Forbidden Woods is a location in Bloodborne.

The Forbidden Woods is a large forest on the outskirts of Yharnam, lying between the city and the Forbidden Grave and Byrgenwerth. It is home to a village of those who have been chased from the city, and is currently the nesting grounds of giant, venomous and parasitic snakes that have used its denizens as hosts. Entering the forest is forbidden by the Healing Church.

There are many different places that make up the Forbidden Woods, as it is one of the largest areas in Yharnam.

There are two forest areas, two windmills, and a village between both.

The path to the Forbidden Woods is through the large plaza with two Church Giants roaming around that connects Cathedral Ward with the Grand Cathedral. The path is at the side and is blocked by one of the giants. The Forbidden Woods door will lie at the end of the path.

The Forbidden Woods door will be locked and requires a password. The password is obtained by investigating the skull on top of the altar in the Grand Cathedral, after defeating Vicar Amelia.

In the Forbidden Woods, there is an Underground Cavern which leads to the grave blocked off by the locked gate in the game. In order to reach this area, follow the lanterns to the first village in the Woods, the one right before the oily mire, and go up and around to the wooden shacks. There is a hidden path which leads off to the left of the dog cages. This path leads underground to a poison swamp inhabited by Church Giants and Parasite Larva. This area does have a lot of Blood Gems, so it is advisable to bring Antidote and wear either the Black Church Set or the White Church Set.

Concept art of the poison swamp

A Church Giant in the slow poison swamp

The shortcut to Iosefka's Clinic 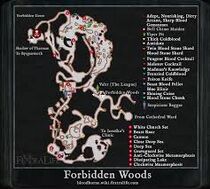 Retrieved from "https://bloodborne.fandom.com/wiki/Forbidden_Woods?oldid=93379"
Community content is available under CC-BY-SA unless otherwise noted.