The Fishing Hamlet, is the final location in Bloodborne's The Old Hunters DLC.

Residing just above the top layer of the Hunter's Nightmare, and invisible from the skies and the ground below. The Fishing Hamlet is well hidden away, and it can be accessed only through the usage of The Astral Clocktower.

It is composed of a wide market plaza surrounding a large well; a communal area filled with habitation huts, overlooked by a large Lighthouse; a large cave system where the actual fishing occurred; and a beach on the coast.

Indeed, as being quite possibly among the most haunting locations throughout both Yharnam and The Nightmare Realm, there are many mysteries surrounding this bizarre land. However despite serving as a place of both great tragedy and horror, it is both known and accepted that this fishing village was once the location where one day, a Great One washed ashore on one of its beaches. That Great One was Kos, and she had already passed away from unknown circumstances beforehand, but within her remains, she carried two things to this village with her: strange parasites, and a fetus.

Throughout this village, players can observe the various degrees of decay that the sea has had on the village, with various amounts of barnacles and corals growing all over the walls and floors of the various huts everywhere, and the waters of the surrounding ocean have flooded the grounds of the village in many parts, and, perhaps the most profound alteration, was in the form of the people, with either Kos herself, or the parasites that were carried by the beached Great One (perhaps even both), having inspired drastic changes in the physiology of the villagers that resided in the Hamlet, having slowly transformed them into hybrids of amphibious humanoids that resemble fish and mollusks.

Maybe perhaps the strangest and even more haunting aspect of this Hamlet would have to be the series of colossal fallen masts of various shipwrecks floating just above the surface of the waters' that surround the village's outskirts, suggesting that either they were once used by the residents of The Hamlet themselves, or perhaps, much worse, was that some kind of great and terrible event occurred here long before The Fishing Hamlet was drawn into The Nightmare Realm.

There is also an interesting note that when observing the behavior exhibited by the villagers. Despite their inhuman transformations, they nevertheless appear to pray to Kos, and they also seem to be harvesting the parasites she left behind to use them as both a primary food source as well as fuel. Evidence for this can be seen in the form of the large abundance of barrels around The Hamlet carrying the parasites in addition to the various explosive oil urns that lay about, which the Fishmen pair with firebombs to attack the player, as well as small candles found throughout the Hamlet, which all appear to have been burning from the parasites themselves.

These are the muttering around the houses in the Fishing Hamlet. 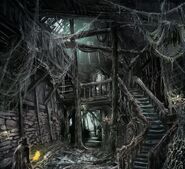 Concept art of the outside of the Parasite farm 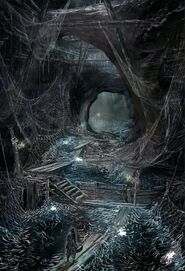 Concept art of the Parasite farm

Path to the Lighthouse Hut 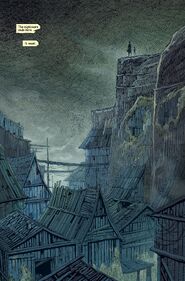 The Fishing Hamlet as seen in Bloodborne: The Death of Sleep.
Русский
Community content is available under CC-BY-SA unless otherwise noted.