"A hunter should hunt beasts.
Leave the hunting of hunters to me..."
— Eileen the Crow

Eileen the Crow is a character in Bloodborne and the main protagonist of Bloodborne: A Song of Crows.

Eileen the Crow is a Hunter of Hunters, a hunter tasked with slaying hunters who have gone blood-drunk and sub-sequentially mad and violent from Beast Hunting.

She is an old woman who complains about her duty, but fulfills it nonetheless, as it is her responsibility, though she will indulge in claiming she is becoming far too old for her line of work.

Regardless, Eileen is a level headed individual and a caring person, often expressing great empathy and motherly concern towards the player.

She wears the Crowfeather Set, and wields the Blade of Mercy alongside the popular Hunter Pistol. She occasionally throws Throwing Knives.

Eileen is a member of the Hunter of Hunters covenant, and continues a long-running tradition of giving the dead a sky burial rather than sealing them inside coffins, which she considers blasphemous. Despite her age, she still continues her task of hunting down hunters who have gone mad from the beast hunt and does so quite effectively.

At the end of her questline, Eileen can be found outside of the Grand Cathedral, terribly injured. She assures the hunter that she's taken blood and finally admits that the hunt is too much for her and passes on her badge and the Hunter rune. After eliminating the final hunter within the cathedral, leaving and returning will reveal that her body has disappeared, indicating that she has either died or gotten up and left.

Players can at any given point kill Eileen, but will only receive the Crow Hunter Badge. This will fail her questline, and players will receive nothing else. This means players will lose out on a special attire, two gestures, and a special Oath Memory Caryll Rune.

Eileen's questline cannot be started if she is not spoken to in Central Yharnam. If one fails to activate her questline, she can later be found at the Grand Cathedral in the place of the final target, but she will be hostile towards the Hunter.

Eileen the Crow at Tomb of Oedon (3rd encounter) 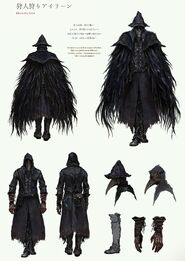 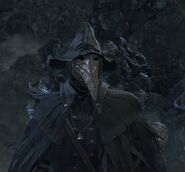 In the alpha version of the game, Eileen could be beckoned. This was cut with the game’s release. 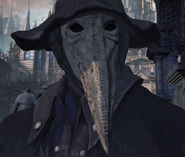 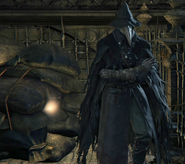 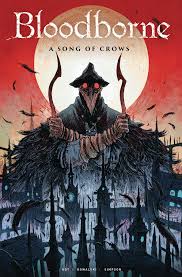 Eileen on the front cover of Bloodborne: A Song of Crows. 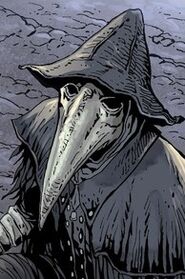 Eileen as she appears in A Song of Crows.

Eileen burying a mass of corpses.
Add a photo to this gallery
Retrieved from "https://bloodborne.fandom.com/wiki/Eileen_the_Crow?oldid=88747"
Community content is available under CC-BY-SA unless otherwise noted.