Ebrietas, Daughter of the Cosmos is a boss/Chalice Dungeon boss in Bloodborne.

One of the eldritch Great Ones, Ebrietas is a monstrous creature that resembles a slug with squid-like tentacles emerging from her back. Her face appears split in half and is covered in strange growths that resemble fungus that surround her vulnerable head (only red flesh is seen, so it is possible that she has no real mouth) but, despite being a Kin (most of them have bulging and globular yellow eyes), she has only two oval shaped green eyes. Ebrietas also possesses a set of skeletal wings that grant her limited flight.

The fact that this being is the conduit between the Church and the Great Ones, coupled with the appellation "daughter" and her appearance, possibly shows that she is the first Celestial Child. Like most of the Kin she has gray blood but is able to spit a red fluid, similar to human blood, that inflicts Frenzy.

When the player finds her she seems to be mourning at the Altar of Despair, which appears to be the corpse of a fallen great one that resembles Rom.

The object of the Healing Church's worship, Ebrietas communes only with the highest members of the Church, guiding them in the ways of Blood Ministration. She is one of the Great Ones who was left behind in the old labyrinth, eventually discovered by the Healing Church. The Healing Church later founded the Choir to protect and study her. She is the only Great One that wants to coexist with humans.

The fight is split into two phases.

Ebrietas will attack using her head, arm and tentacles when in melee range. She also uses her charge attack.

Phase two begins when her health is at 50%. She will begin spewing a red fluid from her head. She is vulnerable during the transition, but will begin executing random attacks soon after.

Ebrietas is surrounded by arcane particles that deal damage at melee range. She can use these particles to cast arcane projectiles. She is able to use a flying slam attack (see attack patterns). She will also spit blood that causes Frenzy on contact.

The "orbit" will be an imaginary circle around Ebrietas that extends outward about the distance of her tentacle attack. Orbiting means moving around her by following the imaginary circle, and allows for momentum. Aim-unlock allows the ability to roll. 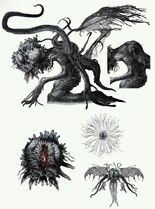 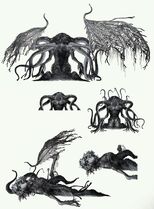 Her grab attack. It deals massive damage and even if the player survive the chewing, Frenzy will kill them 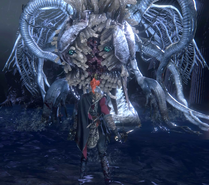 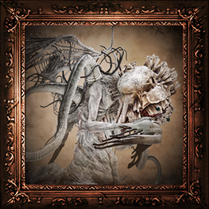 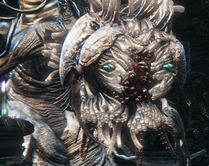 Retrieved from "https://bloodborne.fandom.com/wiki/Ebrietas,_Daughter_of_the_Cosmos?oldid=88966"
Community content is available under CC-BY-SA unless otherwise noted.