The Church Servant is an enemy in Bloodborne.

Church Servants are humanoid but stand almost twice as tall as a human, with pale white skin and blank black eyes. They a wear a rather worn variant of the Black Church Set and White Church Set, though the latter has sometimes either a regular sized cap, akin to the black version, or sometimes, even a wide-rimmed hat. Like Church Giants, they too wear bells around their necks.

There are many Church Servants found in the game, and many kinds of them:

It is believed that when the Healing Church came upon the dungeons underneath Yharnam, that they were able to "tame" the Pthumerians into servitude, through some arcane method.

Church servants move slowly, making their attacks generally easy to avoid, but they dish out a good deal of damage. Hatless and lantern-carrying Servants will attack by swinging or smashing their canes and the scythe variant will use a long-ranged downward strike. Servants with wide-rimmed hats still strike with their canes but tend to favor their guns. The black-robed cross-wielding Servants have both a downward strike similar to the scythe and a forward thrusting attack, both of which cause a small amount of Frenzy to build up in addition to dealing damage.

If the player has more than 15 Insight some of the Servants' attacks will change - perhaps indicating that the player is seeing the true form of these creatures' weapons, which manifest eyes, tendrils, or flames like most things influenced by the Great Ones. Lantern Servants have their lamps covered in eyes, allowing them to shoot arcane projectiles in bursts of three or create an AoE arcane blast around them. Scythe Servants will have dark flames surrounding their blades, signifying additional fire damage. Black-robed Servants have dark auras surrounding the top of their weapon, and the amount of Frenzy they inflict is increased.

One way of dealing with all variations of this enemy is to move behind them and attack from there, though in the case of a higher-insight Lantern Servant it's best to be mindful of the AoE attack they'll sometimes use to counter. Unlike most enemies, they can be staggered by a gunshot at any time during their attack animations; most of their melee attacks are obviously telegraphed, which, combined with their sluggishness, makes parrying and visceral attacks highly effective. 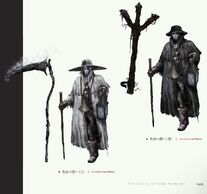 Staff variation of the Church Servant

Scythe variation seen by a player with 15+ Insight, note that the blade is wreathed in flames. 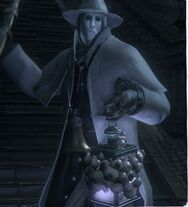 With enough Insight the lantern becomes a revolting and dangerous weapon.

With enough Insight, their crucifix inflicts a powerful Frenzy debuff. 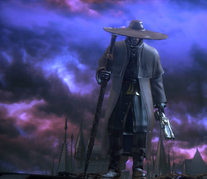 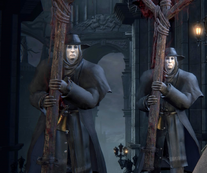 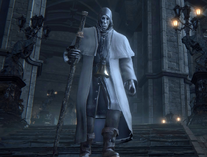 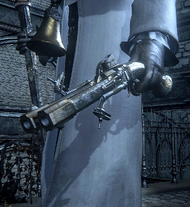 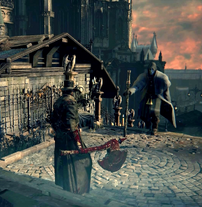 Add a photo to this gallery
Retrieved from "https://bloodborne.fandom.com/wiki/Church_Servant?oldid=88933"
Community content is available under CC-BY-SA unless otherwise noted.