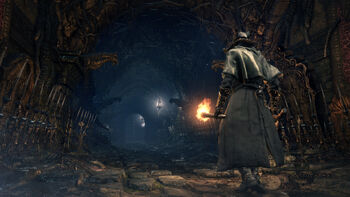 Chalice Dungeons are a type of location in Bloodborne.

Beneath Yharnam lies an intricate old labyrinth of myriad, endless ruins. By conducting a Chalice Ritual, the seal to the old labyrinth can be broken, allowing you to explore it in the form of Chalice Dungeons.

Select CHALICE RITUAL at a Ritual Altar in the Hunter's Dream, and then select a Holy Chalice and an offering in order to conduct the ritual and unseal a Chalice Dungeon. When using a root chalice, the structure of the unsealed Chalice Dungeon will change each time the ritual is conducted.

Note: Chalice Dungeons are often referred to as an 'old labyrinth' in-game, including Chalice descriptions.

Chalice Dungeons are subsections of an old labyrinth carved out by Pthumerians[1] and known as a tomb of the gods.[2] This title refers to Great Ones, beings that might be described as gods.[3] Pthumerians were superhuman beings, just taking a humanoid form, said to have accessed eldritch Truth[1] of the Great Ones. Early Pthumerians were simple guardians of the Great Ones; it was their descendants who proclaimed a capital and a leader, both known as Pthumeru Ihyll.[4] Oldest of these keepers, still encountered within the Chalice Dungeons, gained an eternal life, yet as an ashen form being a result of a ceremony of flame, cremating both body and soul.[5] City of Yharnam takes its name from Pthumeru's last ruler, Queen Yharnam,[6] residing at the deepest dungeon of Pthumeru Ihyll.

Holy Chalices themselves became objects of worship.[7] They can be used to enter Chalice Dungeon by performing the Holy Chalice ritual, based on satiating a chalice with proper materials, the most basic one being a noncoagulable blood.[8] A few were ever brought to the surface. Pthumeru Chalice became a relic in the Old Yharnam[7][9] in the Church of the Good Chalice. Traces of the Old Ones can be still found in old labyrinth, including their blood[10] and pearl slug-like creatures.[11]

Dungeons laying beneath Yharnam were first explored by tomb prospectors, delegates of the Healing Church. It was then known that a knowledge of the Great Ones lies somewhere within the old labyrinth.[12] Exploration began after an initial encounter with a phantasm, augur of the Great Ones able to partially summon abandoned Ebrietas.[13] Phantasms were discovered through Byrgenwerth's contact with the arcane, but in the end revealed nothing and failed to make contact with the outer reaches of the cosmos.[14][15] It led to the establishment of the Choir and inquiry into the cosmos starting from within the old labyrinth.[13] However, most tomb prospectors were unable to maintain a sanity when confronted with the old knowledge, as it cannot be understood by a simple mind and usually drives one mad.[16][17]

Eventually, the Choir was able to have audience with Ebrietas herself after discovering a Great Isz Chalice. It's known that it was the first Great Chalice brought back to the surface since the time of Byrgenwerth,[18] suggesting some other Great Chalice had already been found. However, this chalice couldn't be thought of as the Choir's own discovery, as its members are continuing the work that began at Byrgenwerth[19] outside it. Only other known Great Chalice is the one providing access to Pthumeru Ihyll. Land of Isz was, according to the Choir, in contact with the cosmos, allowing the Great Ones to function on transcendental planes of thought.[20] Hence, obtaining the Great Isz Chalice was a cornerstone for members of the Choir.[18]

Within an old labyrinth remain proof of Yharnam not being first to be struck with scourge of the beast. Part of the Chalice Dungeons shows what remained of Loran, land devoured by sands after being infected by the scourge.[21] However, just as it was in Yharnam, it is not clear if medical procedures said to be intended to control the scourge weren't the cause of the outbreak.[22] At the time, some have made terrifying extrapolation that Yharnam will be next.[21] Loran must have been lost after, or not so far before, establishment of the Healing Church, as its infamous eccentric Archibald dedicated his life to research on sparks emitted on the hides of the darkbeasts,[23] which were only inhabiting Loran (with the exception of Darkbeast Paarl).

Chalice Dungeons are created by conducting a Chalice Ritual at a Ritual Altar. Performing Chalice rituals consume Blood Echoes and chalice materials. They are optional content; however, there are two Trophies possible to get only through Chalice Dungeons – including the only one Gold Trophy for a boss.

Players are able to co-op in Chalice Dungeons and even share their dungeons for others to experience. Sinister Chalices can be used to create PvP-type dungeons.

Chalice Dungeons other than Root are fixed – bosses for different layers and loot stay the same. While Root Chalice Dungeons are often said to be randomly generated, their number is in fact limited, but high enough to provide rather unique experiences. The difficulty of the dungeon increases with its depth and rites. It does not change in New Game+.

While Chalice Dungeons are much varied, they always have 3 lamps and share the same basic pattern, as well as ways of informing the players about path the should take. Basic elements are:

When the player performs a chalice ritual to create a Root Chalice Dungeon, they can perform Additional Rites that will make the challenge greater while also increasing the rewards:

"Invigorates the Watchers, making them more treacherous than normal, but also making them worthy prey for a special hunt."

"Defiles dungeons in which hunters' HP is greatly eroded, but what better place to seek cursed blood gems but in the midst of defilement?"

False depth chalice dungeons are save edited dungeons that allow quick access to Fetid Rotted Cursed (FRC) dungeons without going through all the other lower depth dungeons such as the Cursed and Defiled Chalice; all it requires is the Pthumeru Root Chalice. The enemies in this chalice are depth 5 difficulty, and the obtainable items in these dungeons include high-tier Blood Gems, chalice materials, Runes and Lost/Uncanny variants of weapons.

Reverse depth is the opposite of false depth; it's depth 1 difficulty and gives low tier blood gems, but the pay off is Blood Stone Chunks and Blood Rocks. It requires a depth 5 chalice. Luckily there is a False Depth for getting a Sinister Pthumeru Ihyll Root Chalice. The bosses for Reverse depth are Pthumeru Root Chalice.

It is not recommended to do this on your first playthrough.

There is a boss room at the end of each layer. Tomb prospectors must kill the boss to explore deeper depth.

The following is a list of Chalice Dungeons bosses: 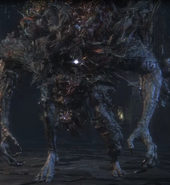 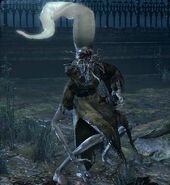 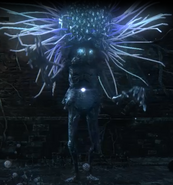 Ebrietas, Daughter of the Cosmos

Keeper of the Old Lords 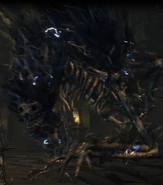 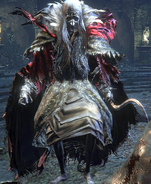 Watchdog of the Old Lords 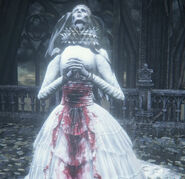 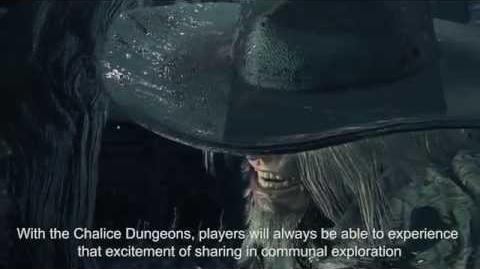 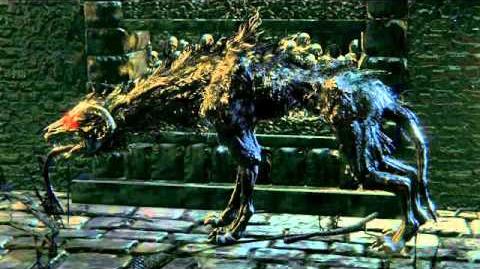 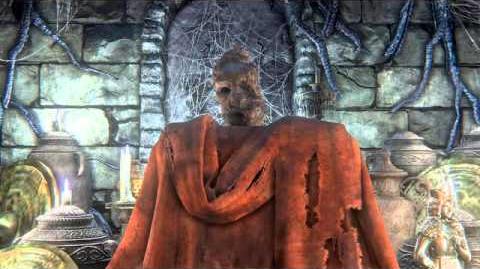 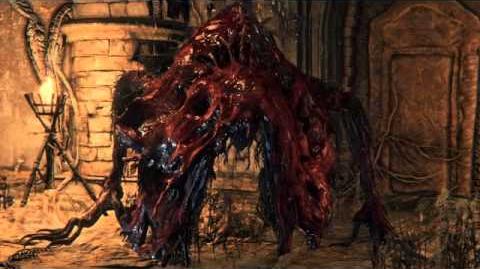 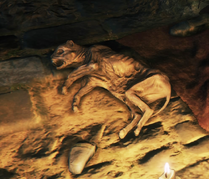 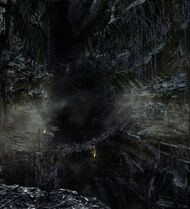