Central Yharnam is a location in Bloodborne.

Central Yharnam is an upper-class district located in the center of the city, an area characterized by bridges and large claustrophobic streets.

Central Yharnam is separated from the rest of the city by a cliff and directly connects to the Cathedral Ward on by two separate sites, the Tomb of Oedon, located past aqueducts and sewers of the city, and the Great Bridge, used for simple transportation of carriages. Though the latter is the easiest and most direct path to the ward, it is currently locked and off-limits by order of the Healing Church.

Perhaps more evidently, it is also where Iosefka's Clinic, a medical facility that deals in blood ministration and scientific research is located. However, Iosefka herself has locked the doors, and refuses anyone to enter, the gate outside can only be opened from within. 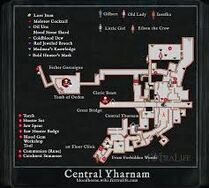 Add a photo to this gallery
Retrieved from "https://bloodborne.fandom.com/wiki/Central_Yharnam?oldid=89870"
Community content is available under CC-BY-SA unless otherwise noted.