The Celestial Minion is an enemy in Bloodborne.

Celestial Minions are small humanoid creatures with blue skin and a large bulbous cranium. They appear malnourished and frail with exposed ribs and disjointed limbs, yet are capable of inflicting rapid and damaging blows. Some Minions will sprout a mass of tentacles from their heads which they can use to fire powerful energy blasts.

Celestial Minions are seemingly the victims of the experiments conducted by The Choir, most notably the Imposter Iosefka.

It is discovered through The Old Hunters DLC that the Healing Church's early attempts to transcend humanity, by giving them the eyes on the inside, caused the patients to gruesomely mutate. Among other things, the deformities included the elongation of the limbs and body, as well as the development of a swollen head with most of the features replaced by the fleshy mass. In the Nightmare version of the Lumenflower Gardens, where the Celestial Emissary is faced in the natural world, some of these patients began to tend to the flowers and even developed the same cosmic powers of the Celestial Minions.

Some of the final results of this, the Living Failures boss, is clearly an underdeveloped Celestial Emissary, located just below the Lumenwood Gardens that the failures appear in. They behave and look similar to it, but their attacks are much more powerful and visibly clumsier than the actual Great One, possibly signifying a lack of fine control.

While they are not Great Ones, Celestial Minions seem to be successful Kin transformations, some of which are theorized to have become the Orphanage.

Celestial Minions are usually docile and will only attack the player if disturbed. Although they are fairly weak enemies and easily staggered, their attacks are surprisingly powerful. They often appear as a trio although one group in the Isz Gravestone is made up of six minions which can be potentially lethal if they manage to corner the player. Ranged weapons can be useful in isolating and dispatching them.

The Celestial Minions with tentacle heads are considerably more dangerous as they are capable of firing rapid energy blasts from a great distance. Ranged weapons can be used to eliminate them from relative safety although it is advised to use cover to block their projectiles. If engaging in close combat, the player should sprint towards them whilst zig-zagging to evade the blasts. They are completely defenseless at close range, making them simple to dispatch.

Both types of Celestial Minions are very vulnerable to bolt damage. The Tonitrus can be very effective as can buffing a weapon with Bolt Paper. 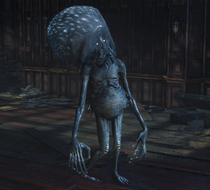 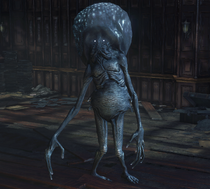 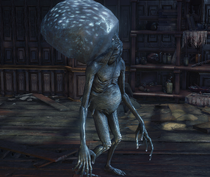 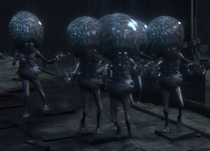 A group of Celestial Minions. 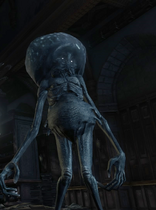 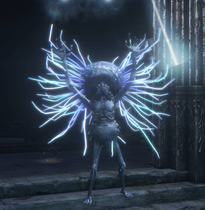 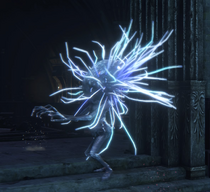 The poor Iosefka was one of the victims of the imposter Iosefka. 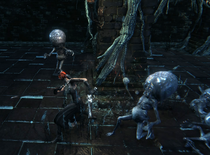 The celestial minion at Iosefka's Clinic that still has a human hand.

The human hand of the celestial minion at the clinic.