"Across the valley to the East of Yharnam lies
the town of the Healing Church, known as the Cathedral Ward."
— Gilbert

Cathedral Ward is a location in Bloodborne.

Cathedral Ward is a large district that serves as the primary base of operations for the Healing Church, it is home to some of the Church's more powerful members, such as the Church Giants and Church Servants. Every night, the gates of the Ward close as hunters venture out to combat the Beasts.

Navigating through the streets of Cathedral Ward is time consuming, mostly because it is a place that has many streets and paths to other locations, constituting what is easily the largest part of Yharnam's city.

This area is often confused with Oedon Chapel, due to the lamp being located in it, having the title of "Cathedral Ward". In reality, Oedon Chapel is a tiny safe haven that is merely a speck of what constitutes the Cathedral Ward itself. 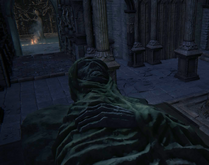 Add a photo to this gallery
Retrieved from "https://bloodborne.fandom.com/wiki/Cathedral_Ward?oldid=90896"
Community content is available under CC-BY-SA unless otherwise noted.