View source
watch 04:03
Wiki Targeted (Games)
Do you like this video?
Play Sound

The Burial Blade is a Trick Weapon in Bloodborne.

A masterpiece that defined the entire array of weapons crafted at the workshop. Its blade is forged with siderite, said to have fallen from the heavens.

Gehrman surely saw the hunt as a dirge of farewell, wishing only that his prey might rest in peace, never again to awaken to another harrowing nightmare.

The Burial Blade is a trick weapon that turns from a curved sword into a large scythe.

The Burial Blade has very wide sweeping attacks, making it an optimal weapon for fighting groups of enemies. The small infusion of Arcane into the blade adds extra damage to Pthumerians, but is not effective against Kin. When transformed, the Burial Blade turns into a complete scythe, increasing the attack radius of the weapon, allowing the wielder to better deal with multiple opponents and attack them from a safer distance.

This weapon is frequently compared to the Hunter Axe, and for good reason. It has a very deceptive reach when transformed and can quickly catch foes off guard. It has a very fluid moveset and it has one of the highest rally potentials in the game which is further boosted when in scythe mode. Another interesting, similar aspect of the Burial Blade is its charge attack, as it can knock down heavy enemies like the Merciless Watcher.

Another great thing about it is that the L2 when in scythe mode is a combination of multiple, powerful downward thrusts into enemies, making it very effective against Kin and Great Ones alike.

In the end, this weapon truly excels at dealing with single or multiple enemies and its high rally potential furthers its use especially in Cursed Chalice Dungeons where health is extremely important to manage. 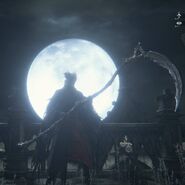