"I'll have to tread carefully.
But that thing still lies in wait. Turn back."
— Eileen the Crow

The Bloody Crow of Cainhurst is an enemy and hostile hunter in Bloodborne.

The Bloody Crow of Cainhurst is a Vileblood Hunter who kills other hunters, making him a target of Eileen the Crow. Unfortunately, he proves too much for Eileen in her old age as she can be found laying horribly injured at the top of the steps to the Grand Cathedral.

A formidable foe, he makes full use of the Chikage's transformed state and liberal use of the Old Hunter Bone, as well as his devastatingly powerful Repeating Pistol. He is able to heal himself twice, typically when he has dropped below 50% health.

The Crow drops the highest form of the Blood Rapture Caryll Rune once killed.

The Bloody Crow of Cainhurst is, by far, one of the most unforgiving Hunter NPCs any player can encounter in the game. This means that he must be dealt with patience and extreme care.

One of the most important factors to note regarding the Crow is that he has high Bloodtinge, as seen by the power of his Repeating Pistol and transformed Chikage. Attire that boosts Blood defense do little to lower damage from these sources; ergo, they aren't worth sacrificing Physical defense for.

Since the Bloody Crow has an extremely large health pool, players should try to whittle him down little by little, chipping away at his health with quick and powerful attacks. However, weapons with either quick horizontal slices, long reach and/or Thrust attacks are recommended. This is due to the fact that the Bloody Crow dodges incessantly, with the benefits of the Old Hunter Bone, and, as such, it is much harder to read when he will fire his Repeating Pistol.

Due to this, a more defensive approach to the fight is recommended. Additionally, should the player be caught by one of the Crow's shots and be parried, it is almost guaranteed to immediately kill the player should the Crow be able to execute a Visceral Attack. However, this strategy can be turned against the Crow; parrying him is a viable tactic that, with all of the Clawmark Caryll Runes equipped, is able to kill him in several Visceral Attacks.

Another tactic to utilize is the drain of his Chikage; while in its transformed state, the Chikage will slowly drain the health of the Crow, essentially allowing the player to lower his health simply by waiting for him to transform the Chikage before backing away from all of his attacks.

Another strategy is to lure him to the bottom of the stairs and poison him. If he is lured to the bottom of the stairs, he will begin walking back up the stairs; after doing this hit him with 3 Poison Knives, which should be enough to poison him. Repeat this strategy until the Crow is dead. However, he will likely heal one or two times during the fight when his health reaches the halfway point, therefore damaging him enough to get him to heal can help reduce the time that this tactic takes to work. 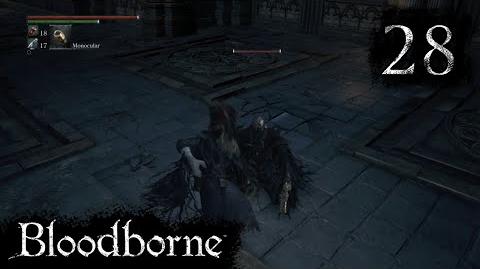 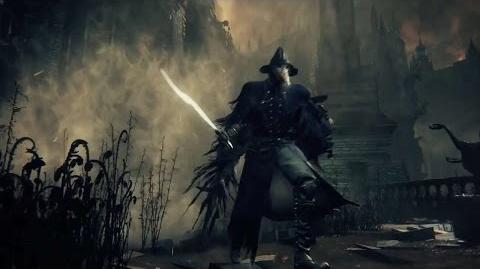 Add a photo to this gallery
Retrieved from "https://bloodborne.fandom.com/wiki/Bloody_Crow_of_Cainhurst?oldid=92242"
Community content is available under CC-BY-SA unless otherwise noted.