The Beast Roar is a Hunter Tool in Bloodborne.

One of the forbidden hunter tools made by Irreverent Izzy.

Borrow the strength of the terrible undead darkbeasts, if only for a moment, to blast surrounding foes back with the force of a roaring beast.

The indescribable sound is broadcast with the caster's own vocal cords, which begs the question, what terrible things lurk deep within the frames of men?

The Beast Roar costs 2 Quicksilver Bullets to use. It makes the caster brace themselves, roar like a beast, and unleashes a shock wave that staggers large enemies and outright knocks smaller foes, like enemy hunters, off their feet.

The shock wave is capable of deflecting most projectiles, and it has multiple active frames. As long as the effect lasts visually, enemies or projectiles will be affected.

With the Beast's Embrace Rune equipped, the shock wave will deal a minute amount of damage, and is changed audibly, but is mostly unchanged.

The early version of Beast Roar

It can ring the Bells in Chalice Dungeons, luring the enemies to the bell location 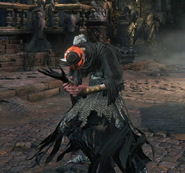 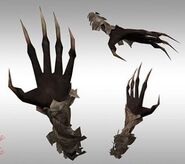 Closer look of the model for the Beast Roar

gifs/images taken of the early version Beast Roar are taken by Meph, here's a link to her wiki [1]