The Augur of Ebrietas is a Hunter Tool in Bloodborne.

Remnant of the eldritch Truth encountered at Byrgenwerth.

Use phantasms, the invertebrates known to be augurs of the Great Ones, to partially summon abandoned Ebrietas.

The initial encounter marked the start of an inquiry into the cosmos from within the old labyrinth, and led to the establishment of the Choir.

Casting it costs a single Quicksilver Bullet, and causes a number of large tentacles to burst from the Hunter's hand. This deals high Arcane damage and is capable of knocking back most enemies and staggers larger foes.

In addition, it also functions as both a parry and a Charged Attack. If timed correctly, it will parry opponents. If it hits an enemy's back, the attack will leave them vulnerable to a Visceral Attack.

The early version of Augur of Ebrietas 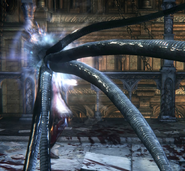 gif taken of the early version Augur of Ebrietas are taken by Meph, here's a link to her wiki [1]

Retrieved from "https://bloodborne.fandom.com/wiki/Augur_of_Ebrietas?oldid=88944"
Community content is available under CC-BY-SA unless otherwise noted.