A Call Beyond is a Hunter Tool in Bloodborne.

One of the secret rites of the Choir.

Long ago, the Healing church used phantasms to reach a lofty plane of darkness, but failed to make contact with the outer reaches of the cosmos.

The rite failed to achieve its intended purpose, but instead created a small exploding star, now a powerful part of the Choir's arsenal.

At times, failure is the mother of invention.

For 7 Quicksilver Bullets, players will unleash a massive barrage of tiny Arcane orbs. Most will strike the area around the caster, while others will lock on to whatever foe the caster is locked on to. It tracks better at range, and the larger the target, the better.

However, it should be used in last resorts or at least with strategic planning due to its ravenous consumption of bullets.

Micolash use A Call beyond

The early version of A Call Beyond 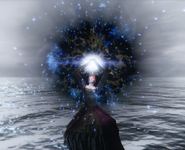 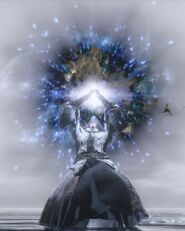 Call beyond zoomed in 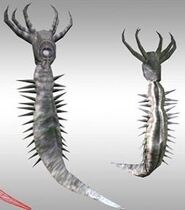 gif taken of the early version A Call Beyond are taken by Meph, here's a link to her wiki [1]

Retrieved from "https://bloodborne.fandom.com/wiki/A_Call_Beyond?oldid=88941"
Community content is available under CC-BY-SA unless otherwise noted.